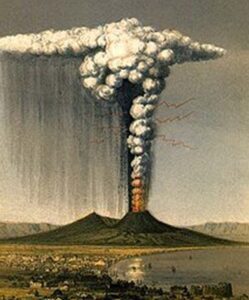 Most of all we all know about Volcanos, they shoot lava high into the air, but did you know what a Plinian volcano is?

The point is that volcanos are not all the same.  Surprise, surprise, yes they are the eruption of gases and lava from the centre of the earth, but ……..

They have different eruptive habits!

We all know how big they are and how much they effect our lives, like the Icelandic one that threw so much into the sky that it actually stopped planes flying over the north Atlantic.

However, the clever guys, the boffins, who research into them, classify them differently. They are more interested in the evolution of the volcanic landform, which it appears decides on the type of eruption that we see.

The Plinian type of volcano is an intensely violent eruption of the kind that destroyed Pompeii on the 29th August 79 AD.  It got its name from Pliny the Elder who was killed trying to save the people in Pompeii that was recorded by his nephew, Pliny the Younger, who watched it from across the bay.

To explain it I have taken how he described it from Educational Musicals Musical Pompeii – The Rain of fire which can be found at www.educationalmusicals.co.uk.

Like how from a volcano hot gases can race.

A pyroclastic flow is its technical name,

With hot ash and gases shooting out from the flame.

The tree-like cloud we now know as a Plinian event,

And to this, yours most truly’s name was lent.

So that is a Plinian Volcano!