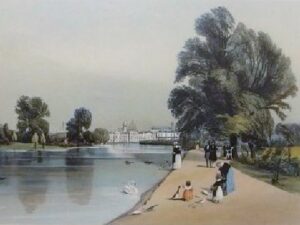 The Victorian public park is a great legacy from the reign of Queen Victoria, when she died in 1901, it was the end of a period of great change in Britain.

One that we now take for granted is the Public Park.  Would you believe that before her reign there were no public parks in Britain.

Of course, there were pleasure gardens and private estate parks, but there were no large expanses of green in the middle of our towns so that people to walk that were actually open to everybody to walk around.  Now, in one way this made sense as in those days there weren’t any suburbs, it was very easy to walk out of the town you lived in and walk in the country.

However, this all changed as in the Victorian era the suburb arrived, which meant that our towns were now surrounded by suburban homes, as these homes started taking over the surrounding green fields.  Suddenly, you couldn’t easily take that walk in the country, it was too far away.  This led politicians, such as the Prime Minister at the time Robert Peel, to champion the idea of free open spaces inside towns, allowing everyone to benefit.

This idea really took off, especially the idea of them being free open spaces!

However, it took until 1847 for the first free park, Birkenhead Park, to open. This was just the start as over the next few years as more and more parks allowing people to enter and enjoy these expansive green parks, completely free of charge.  In 1870 a Liverpool newspaper headlined summed it up ‘the park is for the people – the people should use it without let or hindrance’.

As more and more parks were created, inevitably, they became an ideal site for more and more different events, from football matches to military drills, from fancy fairs to dog walking. Therefore as they grew so they developed to make them more and more enjoyable,  they started having  such things as ornamental lakes, naturalistic miniature woodlands, elaborate floral beds, and an increasing number of decorative and playful fountains and statues. By the end of the 19th century parks had even more extras such as  children’s dells, cycle paths and glasshouses all added to the attractions of public parks without challenging the classless  spirit of their creation. Park were for everyone as that Liverpool newspaper headline said up ‘the park is for the people – the people should use it without let or hindrance’. https://historicengland.org.uk/whats-new/debate/recent/public-parks/the-victorian-legacy/

This is one of the many changes that Queen Victoria’s reign bought to us.  Today we live in a world that is changing quickly, but the Victorian years saw many changes that are as interesting as the developments of today.

So next time you take a walk not your local park, enjoy yourself while remembering it is something else we need to thank the Victorian years, and of course a politician, Robert Peel.