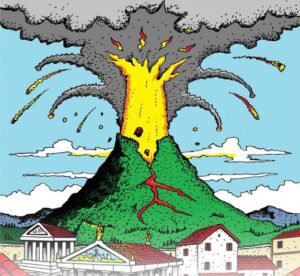 Until recently we were taught that Mount Vesuvius erupted on 24 August 79 AD then it destroyed the nearby Roman city of Pompeii.

But did we get the date wrong?

You see it was his writings that gave us the date, or did the experts get it wrong?

Our information on the date comes from a letter sent by Pliny the Younger, who watched the eruption from the other side of the bay. The problem is that the letter was sent to Tacitus some 20 years after the eruption.

This means that the proof they used to date the event was a letter written some 20 years after the event!  There is more, the text we have today is based on a variety of translations and records that have been made over many centuries.

Different copies of the letters contained different dates, ranging from August to November, however, 24th August was the date that everyone settled on.

Then to add to the confusion, since Roman times we have changed calendars. The differences between the texts could easily have been influenced by confusion over the system of dates.

To explain, today we use the Gregorian calendar, which was introduced in 1582, while the Romans used the Julian Calendar.  Its problem was that it had inaccuracies, mainly in the number of days in each year. https://www.timeanddate.com/calendar/julian-gregorian-switch.html

This means that in recalculating the years to the new calendar, we could also have made a mistake.

Why is all this important? Well, you see, the archaeologists working at Pompeii have recently uncovered an inscription dated two months later throwing everything in doubt. 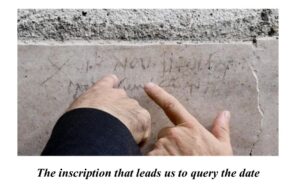 In the picture of the discovery, you can see two hands pointing to words scratched on a stone wall.  They are pointing at the letters NOV, obviously November.

This was discovered in the new excavations and shows a simple scrawl in charcoal, probably made by a builder.   It is dated 16 days before the “calends” of November in the old Roman calendar style, which in our current calendar is October 17th.

The archaeology team who found it said:  “Since it was done in fragile and evanescent charcoal, which could not have been able to last long, it is highly probable that it can be dated to the October of AD 79.” Therefore, it appears to show that the eruption in fact happened on 24th October.”

This discovery hasn’t surprised many historians, as during their dig they came across autumnal fruits and a heating brazier, which wouldn’t be there in August.  You would have thought this would have made them query the date earlier, but it didn’t.

So, have the archaeologists got it wrong?