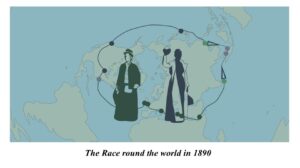 Well, on November 14th 1889 Nellie Bly left New York in the steamer Augusta Victoria as she thought she could, and she did, returning to New York 72 days later.

Nellie Bly was a New York World journalist.  She was fascinated by the book Around the World in Eighty Days in which Phileas Fogg fictionally went round the world in 80 days.  She thought she could better it.

So, she asked her editor, who didn’t like the idea of a woman going all that way on her own, he wanted her to be accompanied by a man. Then he suggested sending a man on the trip, that she didn’t like! It is claimed that she replied, “Start the man, and I’ll start the same day for some other newspaper and beat him.”

Eventually he relented and on the evening of Tuesday, November 12, 1889, asked her to leave for the trip in a couple of days. 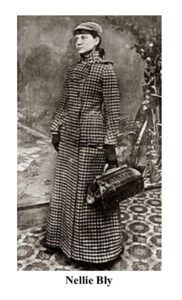 What did she take?

When she wrote about the trip, she explained that all she packed were:

All packed into two small cases!

The Race around the world!

Of course, at the time there was a newspaper war going on in New York so another New York paper The Cosmopolitan, sent their reporter, Elizabeth Bisland, around the other way!

In response, the New York World ran a competition, the “Nellie Bly Guessing Match” asking readers to guess her arrival time to the second.

The race was on.

The Augusta Victoria deposited Nellie at Southampton and after a quick visit to London, she caught the night train to Paris.  However, she broke her journey at Amiens to meet the man who instigated the trip, Jules Verne.  He suggested that she should go across India by train. She decided against it and decided to use ships and bypass India.

How did the paper report her trip

In those days the Telegraph had just been invented so she was able to send regular reports of the trip back to New York.  This, of course, helped sell newspapers and made her trip even more exciting back home.

From Japan all she had to do was cross the Pacific and then find a train to take her all the way to New York.  Unfortunately, crossing the Pacific wasn’t easy as she encountered bad weather. Finally, she arrived in San Francisco, two days behind schedule!

Fortunately, she was back home, in the USA, where strings could be pulled.  Pulitzer, the owner of New York World, chartered a private train, allowing her to arrive back in New Jersey on January 25, 1890, at 3:51 pm.  72 days after she left.

She Won the Race round the world!

Yes, she beat Elizabeth Bisland of the Cosmopolitan who was still crossing the Atlantic, arriving in New York four and a half days later.

Could you do the same trip as quickly without using planes?