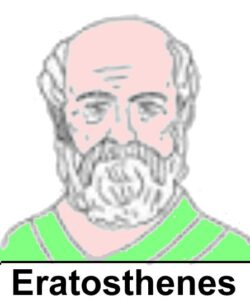 I ask the question because 2,000 years ago Eratosthenes actually worked it out. It would be a superb exercise to see if he was correct, which, of course, he was!

He was a clever guy who lived in Egypt around 240BC.

To him it was obvious that the sun was a long way away, therefore, he assumed that when its ray hit us, they’d be parallel. Well, so close to parallel that it wouldn’t affect his calculations.

He lived in Alexandria, a port town where the Nile reached the Mediterranean.

Watching the sun and its shadows as it move throughout the day, he realised that for this to happen the world had to be round.

He also noticed that at midday in the summer, the sun’s rays were nearly vertical. In fact, he calculated the angle of the rays, well, when I say that, they didn’t actually have angles of degrees in those days. What he did was use an ancient unit of measurement, which was basically a circle very similar to today’s sun dial.

Having worked out the angle, then, this is the mad bit, he sent a man to walk 800 miles down the river Nile to Syene! 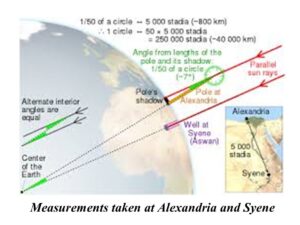 When he got there, at the same time of the day, his man worked out the angle, and then he walked all the way back. You see the man had to walk it to give Eratosthenes an accurate figure of the distance, which was essential for his calculations. They didn’t have Google Maps then!

With this data being the angles and the distance between them, he was able to calculate the speed the sun was moving around the earth and then naturally the actual size of the earth.

Would you believe he nearly got it right? He wasn’t perfect, he was just a little out, however, when you think about it this has to be some achievement, as this was over 2,000 years ago.

To learn how he actually did it go to https://www.wikiwand.com/simple/Eratosthenes

Using the information he had gathered he even worked out the world was on a tilt!

This leads to the obvious question. Could a maths class of children work out the circumference of the world using his information?

Of course, you really need to take a measurement at home, then on holiday, as long as it is on the same meridian.

That could be an expensive school trip!