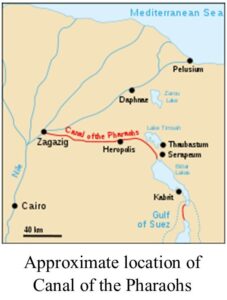 Everyone has heard of the Suez Canal, but did you know that 2,000 years ago the Egyptians had a canal they called the Canal of the Pharaohs.

The Egyptians built it in ancient times and it was used, with a few interruptions until 767AD.

It followed a different route, as you can see from the picture above, but basically it was a route that linked the River Nile to the Red Sea.

The Pharaohs begun it, but it was not finished until in the Ptolemaic period under Ptolemy II.

They think originally it was started by Necho II in the late 6th century BC, but no one can agree when it was finally completed. There are interesting inscriptions comprising of five Egyptian monuments that commemorate the construction and completion of a canal linking the Nile River with the Red Sea by Darius I of Persia. These inscriptions were located along the Darius Canal through the valley of Wadi Tumilat and they probably recorded sections of the canal.

What we do know is that after the death of Alexander the Great, general Ptolemy declared himself Pharaoh of Egypt and his son, Ptolemy II, took up building the canal again.  However, the different water levels blocked him until, around 274/273 BC, his engineers came up with the idea of the lock. This allowed them to regulate the flow of water between the Red Sea and Nile.  Unfortunately, it was prone to the whims of the Nile, and therefore frequently silted up, due to the regular flooding. In fact under Roman Emperors Trajan and Hadrian they had to re-dig the canal.

Islamic texts also discuss the canal, which they say had been silted up by the seventh century but was reopened in 641 or 642 AD by Amr, the Muslim conqueror of Egypt. The canal was in use until, to stop supplies reaching Mecca and Medina, who were in rebellion, so it was closed in 767AD.