Did an Italian claim the New World for Spain? 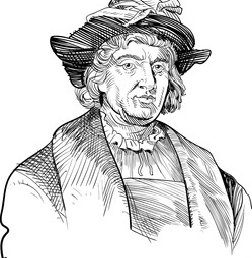 Well, we think Christopher Columbus was Italian, but nobody knows for certain.  We know he was convinced that the world was round, which wasn’t a brilliant idea as Pythagoras in Ancient Greek times had already worked this out.  This, of course, is why Columbus was certain that if he went across the Atlantic for long enough, he would reach Japan.  Unfortunately, for his theory the Americas were in the way!

Pythagoras had originally worked out that if the moon was round, which, of course, you could see that it was, it followed that the Earth must also be. Following this up the Hellenistic astronomers had worked what the circumference of the earth was!

This was why Columbus thought that he could find an easier route to Japan, however, this meant convincing the sceptics, and there were lots of them, that the world was actually round.

The interesting thing is that nobody is certain where he was born, it is said that he was born in Genoa, Italy, however, there are others who say that he came to Genoa from Spain or Poland or even Greece. The reason for the discrepancies is that in Italian his name is Cristoforo Colombo, while in Spanish it is Cristóbal Colón. To make it even more confusing he answered in different times of his life to Christoual, Christovam, Christofferus de Colombo, and even Xpoual de Colón! So where did he come from? https://www.britannica.com/list/5-unbelievable-facts-about-christopher-columbus

Then if you look at the name of his ships there is a discrepancy here. 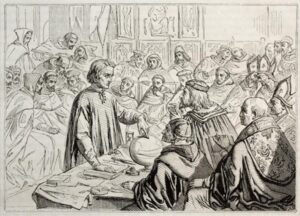 Originally, he went to King John II of Portugal, where he was living at the time. He explained his idea of finding a quicker route to Japan and asked him for several ships. He had explained to the King that according to his calculations Japan lay just 3,500 miles to the west across the Atlantic.

King John was not impressed, and he missed an enormous opportunity, as he couldn’t see how he or Portugal could benefit.   It appears that for nearly 10 years Columbus was trying to sell the idea that he wanted to find a western sea route to Asia. He went to England then France, where at both countries he got a “no”. When he got to Spain the Royal advisors also raised concerns to King Ferdinand and Queen Isabella, telling them that the experts had all confirmed that his calculations were wrong. However, the King and Queen had another target, to increase the Spanish Empire.  You see they realised  that even if the calculations were wrong he would come across new countries as the trip progressed.  Their idea was that he could claim all the lands he reached as Spanish, in this way they would quickly increase the size and wealth of the Spanish Empire.

With this in mind, they agreed to give him three ships, in return for the ships Columbus agreed to claim any new lands that he discovered for the Spanish Empire.  The Spanish King and Queen made a very good deal, one which was the steppingstone to making the Spanish empire into one of the 16th Centuries super powers. 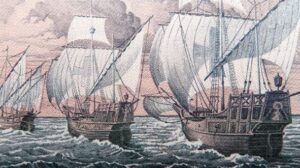 Now, let’s get back to the controversy about the names of the ships.  We are told that his ships were named Niña, Pinta, and Santa Maria. However, it now appears that they were not the names of the ships, they were their nicknames. In those days it was a Spanish tradition to name their ships after saints. This got confusing to everyone so to reduce the confusion they started giving their ships nicknames.

Therefore, we now understand that:

To read more blogs like this go to https://www.educationalmusicals.co.uk/history-blog/