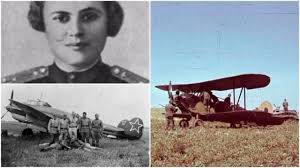 “The Night Witches” is the name given by German soldiers to Russian female pilots on the Eastern Front during World War II.  “The Night Witches” flew under the cover of darkness their wooden biplanes toward their target.  Then, as they got close to their target, they switched their engines to idle mode, glided over their target and released their bombs.

You would image that, as they were such a successful asset for the Russians on the Eastern Front, they would have been given total support. Not true!

The Original Reception, from the Russian Soldiers

They were not welcomed by the Russian Military machine.   The men saw women as inferior, so they made certain that they were given used and, yes, over-sized shoes, by the men. This meant that the ladies had to fill them out with several layers of socks!  Then, it was made certain that they only had rudimentary tools like rulers, flashlights and pencils, nothing sophisticated.

The male soldiers didn’t like women in action, so they didn’t support them.  This meant that they had to live through continual sexual harassment and being treated like second class citizens. 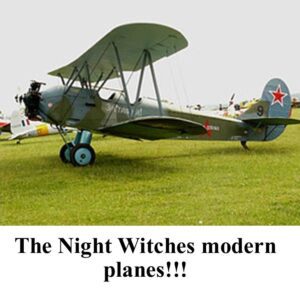 For example, they were given old plywood biplanes from the 1920s. Even so these incredible women took these bare-bones planes to war at the cold of the night. After all the sexual harassment on the ground, in the air they only faced German bullets and frostbite, it was so cold up there!

There is more, with the weight of the bombs, the age of the planes while flying at such low altitudes, they didn’t even have parachutes! Well, eventually, they did in 1944. https://taskandpurpose.com/history/night-witches-wwii-pilots/

However, with all these difficulties, in their rickety old biplanes, once in the air these ladies became feared killing machines.

As a result, the Germans came to fear the nightly terror as around 80 female pilots were dropping bombs on them from rickety wooden planes.  They called them Night Witches as they sounded like brooms sweeping the sky.

These girls flew over 30,000 sorties, which I believe shows that they had to be some of the bravest fighters that World War II produced.

In fact, Irina Rakobolskaya, the “Night Witches” chief of staff, tells us of one girl who managed to fly to the front line seven times and back in her plane. Then she would return, shaking, and they would hang new bombs, refuel her plane, and she’d go off to bomb the target again.

Why were they so frightening?

This is where unwittingly the men helped them.  You see they insisted they had the oldest biplanes in the Russian air force. These old planes were made of canvass and the German radar, (yes, they eventually developed it) couldn’t recognise canvass.  Therefore, they had no warning of their approach. With the engines switched off, the first they knew of their arrival was when the bombs arrived!

This is what made them so successful.

How did they become the Taman Guards?

They became known as 46th “Taman” Guards Night Bomber Aviation Regiment, of the Soviet Air Forces.  It is a bit of a mouthful. All due to their involvement in the Taman campaign, I had never heard of it.  It appears that The Taman Peninsula is on the Black Sea and in 1943 the Germans attempted a further invasion of Russia from the south. The Night Witches were essential in driving the Germans away, and that’s how they got their name.

How were they created?

The story of their creation is interesting as at the time women were not even allowed to take part in combat.

It happened because Marina Raskova, had personal contacts with the Soviet leader Joseph Stalin and she persuaded him to form a female combat unit. Eventually, on October 8, 1941, he issued an  order to deploy three women’s air-force units.  So Raskova formed the 588th Regiment, with a Major Yevdokiya Bershanskaya. It was completely composed of female volunteers in their late teens and early twenties.

That is the story of the Night Witches.