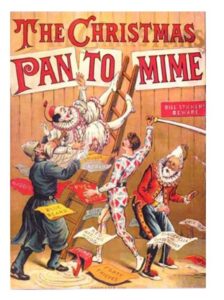 How did we get Pantomimes?

They evolved from Commedia dell’Arte became “Harlequinades” that went on to be the roots of the Pantomimes we see today.  Today’s Pantomimes are a fusion of eccentricity, ambiguity, and absurdity, which have become a public demonstration of our British identity.

How did we get here?

Well, it all started back in Italy. 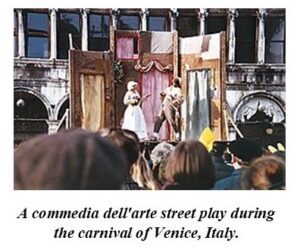 Commedia dell’arte, which means ‘comedy of the artists’, were held at the festivals in Italy that then spread across Europe during the 16th Century. They were called “Italian Comedy”

They used exaggerated characters reflecting social types and stock characters, with foolish old men, devious servants, or military officers all full of false bravado. The characters were all overstated and always had a know-it-all doctor called Il Dottore, or a greedy old man called Pantalone.

Many groups performed Commedia dell’arte, and they often performed outside on platforms or in places such as a piazza.

Even though it started in Italy Commedia dell’arte quickly spread across Europe. 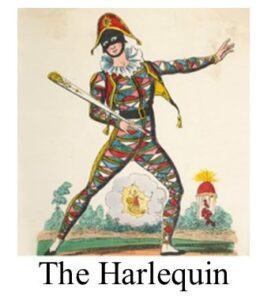 This then slowly evolved into Harlequinades, a fun form of entertainment with dance, music, tumbling, acrobatics and, most importantly a series of mischievous characters.

The most famous of which was Harlequin, hence the name.  He performed along with his companions, Scaramouche, Pantaloon, Pierrot, Punch and love-interest Columbine.

This, which developed in England, between the 17th and mid-19th centuries became known as the British theatrical genre, Harlequinade.

It started as a slapstick adaptation of the Commedia dell’arte and developed into comic scenes in the lives of its five main characters. These were Harlequin, who loves Columbine; Columbine’s greedy and the foolish father, Pantaloon. Throughout, he tries to separate the lovers with the help of the mischievous Clown, a servant, Pierrot, which always results in chaotic chase scenes.

These led to the first pantomimes, these started in their different forms from the late 1600s. They started as ‘after-pieces’ put on after a serious show. As the prices were lower than the main performance, they became popular with the working classes, who could see them after work.

They were basically slapstick comedies, but not Pantomimes as we know them today.  However, there was always a lot of misunderstanding or confusion that eventually led to a large staged, comic brawl. 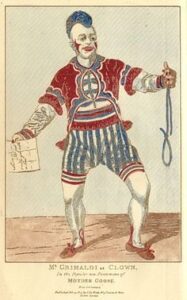 This resulted in the arrival of the most famous clown of all, Joe Grimaldi. He became a famous clown in the 1820s, he really made the clown popular in pantomimes. His popularity was such that each night he appeared at Sadlers Wells theatre. He would then run three miles to Covent Garden for his next performance. He was very proud that he was never a circus clown. He only appeared on stage in theatres, which is weird as the name ‘Joey’ became a synonym for circus clowns everywhere.

The Arrival of Pantomime in Britain

Pantomime now developed with men dressed as women, and women as men, but how did something so eccentric find its way into British theatre.  I believe it was of our sense of humour and with the fact that good always conquered evil, hope triumphed over adversity.

It came about when in 1720 John Rich started a new kind of show.  His show created energetic chases, always featuring the adventures of Harlequin and Columbine, the comedic servants. But most amazing were the transformations that happened at the touch of his magic wand, creating mechanical serpents and flying vehicles.

Why Pantomimes are at Christmas?

These pantomimes were bitterly controversial. Critics saw these foreign shows as a threat that would lead to the death of Shakespeare and the serious theatre.

However, David Garrick, an 18th century actor-manager, realized money could be made from Pantomime. As he said, “If they won’t come to Lear and Hamlet, I must give them Harlequin”.

With this in mind he made pantomime something we saw at Christmas. He owned the Drury Lane theatre where he only put on pantomimes in the Christmas season. It stuck. Then other theatres followed. Pantomimes became associated with Christmas. You saw serious theatre in the rest of the year, Christmas was for fun.

I am one of the many who love pantomime. It is for this reason that we, Educational Musicals, have published 5 potty pantos. They are short 40-minute pantomimes where we have slightly twisted the classic stories to make them a bit “potty”.

To learn more about them go to https://www.educationalmusicals.co.uk/product-category/pantomime-downloads/ where you can read two pages of script and listen to two of the songs, and download them immediately.  They are ideal if you are looking for something simple for a small group to perform this Christmas.