Or is it that children just don’t want to work?

How do you get them involved?

This is not just your problem it is every teacher’s nightmare.

It was just to solve this problem, along with our love of history, that led us to setting up www.educationalmusicals.co.uk.

We were disappointed that so many children found history boring, so much so that in our show The Victorian Historian https://www.educationalmusicals.co.uk/product/the-victorian-historian/ we have a  song called “History is Boring”, and it’s the opening song!

We have very carefully composed our songs so that children, love to sing them, so then by default they get themselves involved in history.  For example, in our show Trafalgar ­- Nelson’s Finest Hour https://www.educationalmusicals.co.uk/product/trafalgar/ we have a song “A Lesson in Naval Warfare”. In it Lord Nelson explains his tactics to win the battle, a

tactic that changed naval warfare for the next 150 years.  Over 400,00 children have sung this song, they even walked around the school singing it. However, they also learnt how he won and then, realised that history wasn’t boring anymore, it was real.

Those many schools that have performed our shows, have told us how it 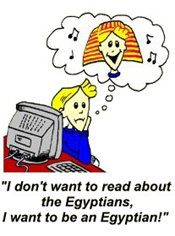 Just like our famous cartoon on the left, they only learn when they can be in history.

Performing in musicals they can, for a short period, be an Egyptian, a Victorian, or even a Tudor King with the result is that they:

Suddenly, as if a miracle has occurred, they will:

Of course, once they get involved in our musicals there are even more benefits, for example: 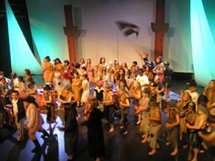 We believe that when a child performs on a stage it is their parents they want to impress and for this reason they excel themselves.  The benefit is that while doing this they find themselves enjoying it, they shine, then their curiosity clicks in, they want to learn more.

History is an important subject, and if we don’t learn to enjoy it, we will keep repeating the mistakes of the past.

To see all our musicals, go to www.educationalmusicals.co.uk

This is why Educational Musicals’ vision is to make history fun!