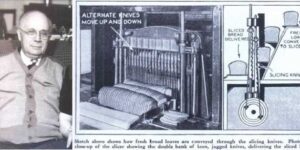 Otto Frederick Rohwedder, invented sliced bread and we all tell people their idea is the greatest thing since sliced bread.

So, was Otto Frederick Rohwedder the greatest inventor?

He was born in Davenport, Iowa, in 1880, from a German family and he lived there for most of his life, he even he died there when he was 92.

He started life as a jeweller who went on to own three shops.  But in his heart, he was an inventor, and yes, he decided that he wanted to produce a bread slicing machine.

He was so incensed with the idea of a bread slicing machine that he sold his jewellery shops to fund his work on the slicing machine. Basically, he wanted to create a bread slicer that automatically cut loaves of bread into slices. He worked on several prototypes, including one that even held a sliced loaf together with metal pins. This model, and several others, would prove unsuccessful. Then disaster struck in 1917, a fire broke out in his workshop, everything went up in flames, even his blueprints and his prototype machine! 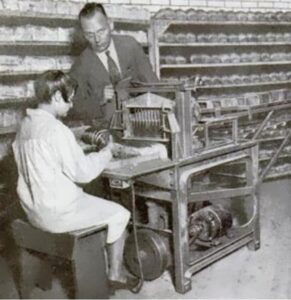 Now he had to start again, and first he needed to find new funds. Then he had to deal with the questioning attitude from bakers, who thought factory-sliced loaves would quickly go stale or fall apart, so before he could complete it, he had to solve that problem. Eventually, after nearly 10 years, he had a successful working bread slicing machine. Read more ….

Now he had a working model he had to sell it. He called it Rohwedder’s “power-driven, multi-bladed” bread slicer and persuaded his friend Frank Bench, who owned the Chillicothe Baking Company, to use it. It worked and it was popular.

Otto’s timing was superb, you see sometime before, the electric toaster had been invented, but it had had a disappointing introduction as they kept catching fire! It took another inventor Charles Strite to solve this problem. 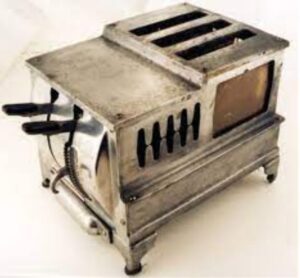 To explain, the first electric toaster had actually been invented by Alan MacMasters in London. It used electric filaments that had a large amount of nickel in their composition. This led them to overheat easily, so you got a lot of burnt toast, to which must be the added problem that you could only toast on one side of the bread at a time.

This is where Charles Strite came in. He realised this and spent many years working on ways to solve this problem and eventually he registered a US patent for a unit that could toast both sides and, more importantly, would pop the bread up when it was ready.  Stopping the fires and burnt toast!

As I said it was perfect timing as due to the invention of the toaster there was a demand to buy bread loaves already cut, which meant that after the Chillicothe Baking Company started using his bread slicing machines all the bakeries wanted one.  Learn more …

Today, the toaster is a normal household fixture, which we think nothing of, but that was different 100 years ago before they had sliced bread or a toaster.

Finally, and this is fascinating, Charles Strite’s invention of a timer mechanism that let the toast pop-up when it was ready before it burnt, is the same mechanism that they use today.

So, was Otto Frederick Rohwedder the greatest inventor?