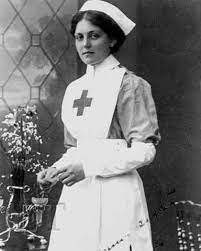 This is an incredible story about a lady, Violet Jessop, who was involved in not one but three sinkings and then lived until she was 83! 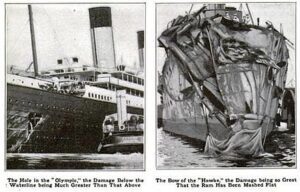 Our story begins in 1911 when she was a stewardess aboard the Olympic. At the time the Olympic was the largest ship in the sea. On her fifth voyage she was coming into the Solent at the same time as the British warship HMS Hawke. Now the problem was that as she was so large, she needed space to turn and as she attempted this manoeuvre, she hit the HMS Hawke. Fortunately, there were no casualties, even though it was severely damaged, it was able to limp back to port for repairs.

After surviving this, Violet, signed up as a stewardess on board the latest, most fantastic Atlantic liner, the Titanic. Now we all know what happened to the Titanic she hit an iceberg.  Again, she survived this!

Now if that was me you wouldn’t have seen me near a ship and especially in war time, but I was not Violet! 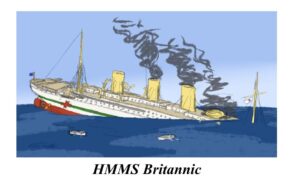 Believe it or not during World War I she signed up for the British Red Cross.  Then because of her experience at sea they decided to send to her to serve on the HMMS Britannic.

Of course, as you could have guessed, the HMMS Britannic hit an underwater mine and sank! In fact, the Britannic sank within 55 minutes, killing 30 of the 1,066 people on board. Again, she survived.

Now by this time she was rather experienced in what happened when ships sink.  She was well versed in what was going to happen when the ship went down.  She knew that it would create a great vortex into which if you were not careful you could be sucked.  She didn’t want this and so she jumped out of the lifeboat just in time, making certain she wasn’t sucked under the ship’s propellers. Unfortunately, this time she was injured, she had a shocking head injury from which, of course, she survived. 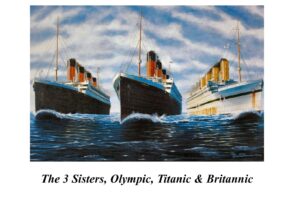 An amazing story, which is even more so when you realise that all of them, the Olympic, the Britannic and the Titanic, were sister ships! They were called The Three Sisters.

That is why Violet Jessop, got the nickname “Miss Unsinkable”, especially as even after all that happened to her, she lived to the ripe old age of 83.

To tell the story of the Titanic we have a musical called The Ship of Dreams – The Voyage of the RMS Titanic.  This show you can download at www.educationalmusicals.co.uk/product/the-ship-of-dreams/. It is an ideal end of year show, and before you buy you can read two pages of script and hear two of the songs.