May 19th is an interesting date for Tudor England 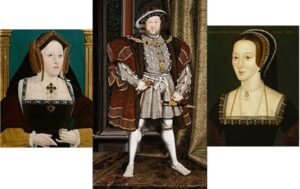 This was the day of a marriage and an execution, both related to Henry VIII.

This was because the Anglo-Spanish Treaty of Medina del Campo included plans for Prince Arthur, Henry VII’s eldest son, to marry Catherine.

After the proxy marriage they had to wait for Henry VII to convince King Ferdinand that England was a safe place for his daughter. Further, Henry VII wanted to make a big splash, so he spent the year of 1500 planning the marriage as a great public spectacle.  Finally, on November 14th, 1501 they married.  Within five months Arthur died!

Under the marriage agreement King Henry VII was due to return the dowry, however he had no intention of so doing, therefore, he made another treaty!  This one agreed that Catherine would marry Henry VII’s second son, Henry, Duke of York, who became Henry VIII, and then this time Catherine’s mother died! Immediately her “value” in the marriage market decreased, suddenly. Ferdinand procrastinated over the remainder of Catherine’s dowry.  There was a further problem. As she had been married, they needed the Pope’s dispensation as in Christian law you couldn’t marry your brother’s widow, unless it had never been consummated, naturally Catherine confirmed it hadn’t. Eventually, after all this, on May 19th, 1509 they were married.

It was a happy marriage, except, she couldn’t bear him a son. Eventually Henry VIII became fanatical about this son business.  He started looking around for a suitable lady and by 1525, he found Anne Boleyn. However, the Pope wouldn’t give him a divorce. In the end Henry’s solution was to set up his own church giving him supremacy over all religious matters, at last, he could marry Anne.

On 1 June 1st, 1533 he married Anne, but she didn’t produce a male heir. She had a daughter, who eventually became Queen Elizabeth I, then a further three miscarriages. This sent Henry looking for another wife and he found Jane Seymour, but first he had to get rid of Anne, which he did by claiming treason and putting her on a show trial. She was convicted on 15 May and beheaded on May 19th, 1536.  He then married Jane Seymour 10 days later!

This is the reason May 19th is an interesting date for Tudor England.