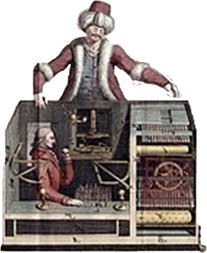 It all happened in 1769 when the French illusionist François Pelletier was invited to perform in Vienna at the court of Maria Theresa of Austria. He was famed for what he did with magnets. The court, and especially the Empress, was impressed with his illusions, except for one man, Wolfgang von Kempelen, a Hungarian civil servant. He vowed to create an even greater illusion.

Which he did!  One year later he introduced the Mechanical Turk, an automatic Chess machine.  It was able to play chess against any human opponent. It even performed the knight’s tour, a puzzle that requires the player to move a knight to occupy every square of a chessboard exactly once. He impressed everyone when he showed it at the court a year later.

The Mechanical Turk was impressive. On the top, wearing Ottoman robes with a turban, was life-sized black bearded head and a torso, hence the name.  He was sitting on a three and a half feet long, two feet wide, and two and a half feet high cabinet. Naturally, there was a chessboard on top in front of him.

In fact, it was a fake, there was a human hiding inside who operated it. He was in fact a chess master.

It was so successful that it toured Europe, and then America, for nearly 80 years, with a chess master inside.  It was a con! Probably the most famous automaton in history, which wasn’t an automaton.

The Mechanical Turk was a sensation, it toured Europe and North America.  Some of the best chess players of the time played it. It didn’t win every game, it lost some, but won the majority of them. It, (I was tempted to say he!) remained popular even after Wolfgang’s death.  The Mechanical Turk even played games against many famous people such as Napoleon Bonaparte and Benjamin Franklin. Read more…

Everything was worked by a series of levers, which meant that the interior was complicated and designed to mislead. This meant that if you opened it from the left, you saw a series of gears and cogs similar to clockwork and if both back doors were opened at the same time, you could actually see right through it. Of course, the other side was also empty other than a red cushion and some detachable bits. It was designed in such a way as you could also see right through the machine. The whole thing was designed to maintain an illusion.

How it worked was that the chessboard on top was rather thin and each chess piece had a small magnet attached to its base, so that once on the board, the magnet would attract a piece of string allowing the operator inside to see where the pieces were on the board and therefore win the match.

Naturally, Wolfgang realised that the operator inside may need to communicate to the presenter outside, so he had two numbered discs positioned one in and one out on top of each other, they could then be moved round to a prearranged code.

It was an illusion that worked for nearly 80 years! View website 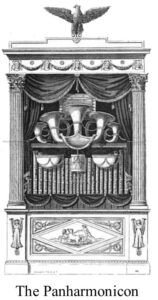 When Kempelen died in 1804, the Mechanical Turk ended up in the hands of an engineer, Johann Maelzel, who continued to travel with it and give performances. He sold it to Eugène Rose de Beauharnais, Duke of Leuchtenberg who was the son of Joséphine, Napoleon’s first wife. As his stepson Napoleon actually adopted him, which is how he got his titles.  Johann Maelsel is an interesting man, as in 1804 he invented The Panharmonicon, an automatic machine that played all the musical instruments of a military band.  It used bellows and was controlled by revolving cylinders playing the notes. Everyone loved it, so much so that it was even admired by Ludwig van Beethoven and other noted composers. This he sold to another, a Parisian admirer for 120,000 francs, which in those days was a lot of money.

The Mechanical Turk continued to stun audiences for serval years after, and you could say that it was the for runner to today’s computer chess programs.