You may have heard of the Alamo, it is part of American Folk law, but have you heard of the Battle of San Jacinto?

The Alamo was a massive defeat, but no one talks of the Battle of San Jacinto, which was a victory.  It was where the Texans got their revenge, gained their freedom and their independence from Mexico. It was a short battle around 800 Texans defeated a Mexican army of 1,500 men, it lasted a whole 18 minutes!

It is claimed that as the Texans attacked the Mexicans they were shouting “Remember the Alamo!”  https://www.history.com/topics/mexico/battle-of-san-jacinto

It happened within two months of The Alamo, that mind blowing defeat for the Texans, where virtually all the Texans at the Alamo were  killed. https://www.history.com/news/who-survived-the-alamo  However, within two months the Texans inflicted an enormous defeat on the Mexicans. A victory that led to Texas getting its independence from Mexico, which, of course, was what the whole thing was about anyway!

How did it happen?

After the massacre at the Alamo the Texan Army started stalking Mexicans, then they found them.  Then, believe it or not, they both made camp within 460 meters of each other!

The Texans were fresh while the Mexicans were exhausted, they had been marching for the last 24 hours, without rest or food. The next morning the Mexicans were tense and ready, but there was no attack from the Texans.  Therefore, when the afternoon came and with still no attack, the Mexicans told their soldiers that they could sleep. 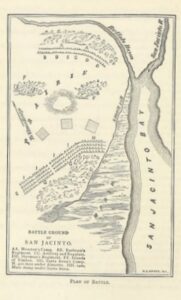 At 4:30 in the afternoon, after walking through the tall grass and getting within 200 yards of the sleeping Mexicans, they opened fire. Now the Texans were after revenge and finding the Mexicans asleep, they immediately went mad. Then after a single volley, the Texans broke ranks and swarmed over the Mexicans, yelling “Remember the Alamo!” and cut them down.  The Mexican soldiers were taken by surprise, they were still asleep, chaos reigned as the officers tried arranging a defence.

In this way the Texas took their revenge for the Alamo.

What happened after the Battle? 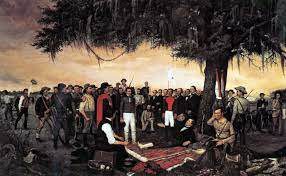 By the middle of May, General Santa Anna, who had been taken prisoner agreed, in exchange for his freedom, to sign a peace treaty.   In it he recognized Texas’ independence in exchange for his freedom. He also agreed to take his forces back across the Rio Grande and not take up arms again against Texas.  Additionally, he agreed to return property confiscated by the Mexicans. Both sides promised to exchange prisoners on an equal basis.

It didn’t work.  When he got back, the Mexicans immediately repealed the treaty and things got a bit tense on the Texas-Mexico border.

The Texans called their new state the Lone Star Republic, while the Mexicans refused to acknowledge the previous treaty or the new independent state. The Texans elected Sam Houston as president, who was, in effect, mandated to apply to join the United States.

Becoming the 28th State of the United States

There was a problem, you see Texas was described as a slave state, one that allowed slaves, the US Congress therefore kept delaying their application until 1845.  Then the new President, John Tyler, who had campaigned on increasing the number of states, worked out a compromise so Texas could join.

On December 29, 1845, Texas became the 28th state of the United States, which started The Mexican American War.  It was really an extension of the previous one, that went on until The Treaty of Guadalupe Hidalgo, that was signed on February 2, 1848.  All because the Mexicans claimed Texas as part of Mexico by repealing General Santa Anna’s treaty but in the end, they lost more than Texas. But that’s another story.