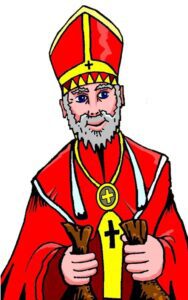 Yes, the first Santa did just that and because of that we hang up stockings at Christmas!

Who was the first Santa?

He was the Christian Bishop of Myra, also known as Nicholas of Bari.  He was alive sometime around 300BC.  Yes, a long time ago.  He was a Greek and his parish was in the seaport of Myra, which in those days was part of the Roman Empire in Asia Minor but is now called Demre and is in Turkey.  The town didn’t move, the country boundaries have!

How did he save the girls?

Legend tells us that the girl’s father was so poor that he didn’t have the dowry that tradition required for their marriages. The father therefore decided that the only way to survive was to sell his three daughters into slavery.  Yes, in those days it was a very weird world!

Well, the bishop heard about this and decided to do something about it.   So, under the cover of darkness, on three separate nights, he threw a bag of gold through their window.  Now by the third night the father was watching. He wanted to find out who was doing this act of generosity.  He saw the bishop and asked him why.  Saint Nicholas then begged him not to reveal his charitable act.

Why we hang up stockings at Christmas?

The other legend linked to this story is that he didn’t throw the bags through the window, but down the chimney.  The story then goes on to say that they landed in stockings the girls had hung up to dry by the fire.

This, tradition tells us, is the reason that today we hang up stockings at Christmas.

Did he do any more good deeds?

Yes, there are more stories of his love of children, his kindness, his generosity, and the miracles he brought about. Some of which we didn’t learnt about until after his death. https://www.biography.com/religious-figure/saint-nicholas

St Nicholas and the three boys

While on his travels, a story is told that Saint Nicholas stopped for the night at an inn. It was at a time when there was a severe famine.  It is said that the cruel, inhuman innkeeper, desperate to keep his paying guests, murdered three young brothers, intending to serve them as food! St Nicholas, realising something was wrong, searched the inn and discovered the remains of the three boys. In horror he prayed for their souls and made the sign of the cross over their bodies. Miraculously, they rose up whole and were restored to life. So the story goes. 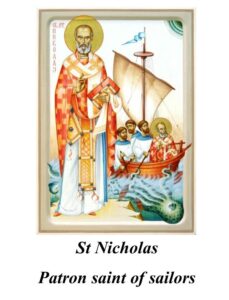 The Patron Saint of Sailors

Saint Nicholas also became the patron saint of sailors, again this is a further legend.  During a threatening storm off the coast of Lycia, the sailors sought his aid to bring them home safely, and they got home safely. After that a custom grew among the sailors of the Aegean and Ionian seas.  Therefore, before leaving for a voyage, they would wish one another a good voyage, with the phrase, “May Saint Nicholas hold the tiller”.

We loved this story so much that we published Saint Nicholas – The Real Santa Claus so your children can enjoy being part of history.

To learn more, hear two of the songs and read two pages of script please go to

Enjoy the show, as history matters.