This happened in Germany 1300 years ago when St Boniface was trying to convince a group of pagans to become Christians.

His problem was that they didn’t believe him, and he realised that he had to do something to convince them. 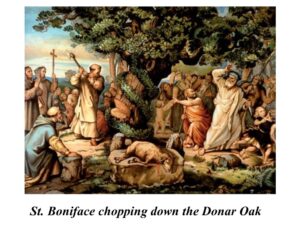 To explain at this time in Northern Europe the people believed that the oak, which they called “Donar’s Oak”, was sacred to their gods and that no harm could come to their tree.

“Donar’s Oak” was worshipped by the Germanic pagans at that time around the town we know call Hesse in Germany.

As St Boniface was travelling across Germany to convert the pagans to Christianity, he kept coming up against the tree and their belief in the tree.

He realised that there was only one thing he could do, cut down the tree. That is what he decided to do.  He chose a huge Oak Tree, called the Donar Oak, and did it in public.  Now, the tree was so large that everyone doubted that a single man could cut it down. However, it only took a couple of axe strokes and the mighty oak toppled over! This had the effect that the pagans saw this as a miracle showing the power of God and they accepted Jesus and converted to Christianity.

Why did they convert?

It appears that there are several stories as to why they converted:

It is the final one that could explain why the Christmas tree is now part of our celebrations. https://www.historytoday.com/archive/history-matters/first-christmas-tree

It was invented by Martin Luther, the religious reformer, as he was walking through a pine forest near his home one winter’s night in 1536.  As he walked, he looked up and saw a wonderous sight of thousands of stars glinting jewel-like among the branches of the trees. This gave him the idea for a candle-lit fir tree to remind his children at Christmas of the heavens from whence their Saviour came.

From then decorated Christmas trees started appearing across Southern Germany, then, again, in Germany they started being bought inside.

When did they come to England? 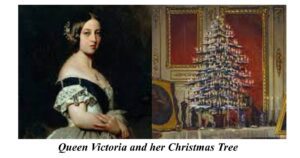 When Charlotte left Germany in 1761 to marry King George, she brought the customs of setting up a yew branch in the house at Christmas.  Queen Charlotte placed it in one of the largest rooms at Kew Palace or Windsor Castle. Assisted by her ladies-in-waiting, she herself dressed the bough. And when all the wax tapers had been lit, the whole Court gathered round and sang carols. The festivity ended with a distribution of gifts from the branch, which included such items as clothes, jewels, plate, toys and sweets.

Then in December, 1840, Prince Albert imported several spruce firs from his native Coburg, they were set up in Buckingham Palace.

We tell this story in our Christmas Musical. What happened on the journey is the subject of our musical The Magic Tree – A Story for Christmas which has twelve original songs that you children will walk round the school singing. 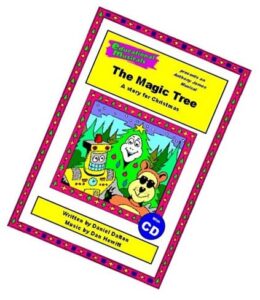 Enjoy the show, your children will love it.