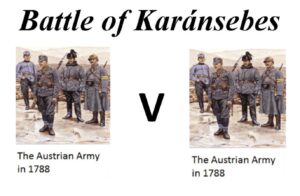 Yes, legend has it that in 1788 the Austrian army fought itself and killed over 10,000 of their own soldiers, and this was before the opposition arrived!

How did it happen?  Well, Austria was at war with Turkey, fighting for control of the Danube River. 100,000 Austrian troops had set up camp near Karánsebes, a village in Romania.  They sent out scouts to see if they could find the Turks. They couldn’t, however, they did find some gypsies selling alcohol.  Fatal, they bought the lot!  Then once back at camp, guess what? Well, it was the night before a big battle, whatever else would you do? They started drinking!

As they drunk more, they got noisier, then other soldiers wanted to join in. The scouts weren’t happy with this, so a fight broke out.  Then more soldiers tried to join, suddenly shots rang out, someone said the Turks had arrived, which, of course, they hadn’t.

You guessed it, these drunken soldiers all rushed off to charge the enemy, more shots were fired, this caused the cavalry to join in. Soldiers everywhere were killing everyone they could.  However, the enemy were in fact the rest of the Austrian army, who naturally instantly reacted as they thought they were being attacked by the Turks.

It was mayhem.  Why, you ask, didn’t they know they were all on the same side?

It was because at that time the Austrian army was a mixture of several different nationalities and they all spoke different languages, German, Hungarian, Polish, and Czechoslovakian being just a few.  With the result that in all the confusion the troops and their officers didn’t understand one another.

Therefore, when the Turks eventually arrived, two days later, they came across a field with over 10,000 dead or wounded Austrian soldiers but no army!

The result was that a confused Turkish army took Karánsebes with no casualties and no battle!