The Battle of Lake Tanzania 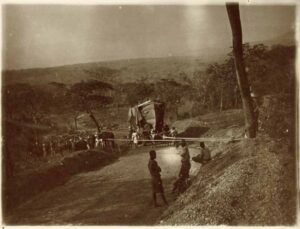 The First World War Battle of Lake Tanganyika is an example of when the fighting becomes an anti-climax, and it is the military logistics of getting the fighting machine to the place of action, that wins the battle.  By this I mean the planning and carrying out of the movement, supply, and maintenance of men and equipment to the front line, that is essential before any army can win.

Why then is the Battle of Lake Tanganyika such a good case?  Well, the point is that Lake Tanganyika is in the middle of the African continent, surrounded by the modern day states of Tanzania and the Democratic Republic of Congo. However, in those days the region was controlled either by the Germans or the Belgians.  In effect this strategically important lake was dominated by German naval units, while our allies, the Belgians, had little naval power on the lake, which meant that the British had to find a way to control it.

The point about all this is that the German Army was only in East Africa to divert Allied forces and supplies from Europe to Africa.  This German force was led by Lieutenant-Colonel Paul von Lettow-Vorbeck, who in his later years achieved fame when on being offered the ambassadorship to the Court of James in 1935, told Hitler to go f*** himself.  Not certain what happened to him after that! But you can learn more about him at https://www.wearethemighty.com/mighty-history/paul-lettow-vorbeck-hitler-wwi/

Anyway, back to the story.  The British problem was that they had no ships on the lake while the Germans did!  Two ships, the Kingani and the Hedwigi, which meant that they controlled the lake.

What could the British do?  Well, as they usually do in these situations. The British chose an egotist, a liar, a hot head, but one who knew the region, spoke French and German and most importantly was available.  Lieutenant Commander Geoffrey Spicer-Simson!

Simson chose two 40-foot armed motor launches, which he named as HMS Mimi and HMS Toutou along with 27 men, all of which he had put on a boat to Africa. 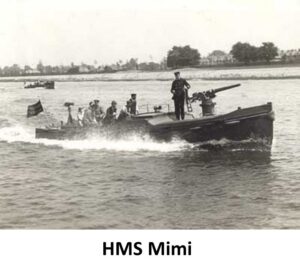 On arrival at Cape Town, they loaded the boats onto a train bound for Fungurume. Now we get to the amazing bit.  The 27 men then pulled the two boats 150 miles! They did this by rolling them on logs, using oxen, occasionally steam tractors, but mostly with their own brute strength.  Finally, they reached Sankisia, where they gratefully put them on a train that took them the rest of the way to Lukuga, where they launched them into Lake Tanganyika.

At the time a contemporary writer wrote, “No single achievement during WW1 was distinguished by more bizarre features than the successfully executed undertaking of twenty-eight daring men who transported a ‘ready-made’ navy overland through the wilds of Africa to destroy an enemy flotilla on Lake Tanganyika.”

Of course, the Germans weren’t expecting them, which meant that when on December 1, 1915 HMS Mimi and HMS Toutou spotted the German ship Kingani.  It only took minutes to capture it.  They now had another ship! This they named the HMS Fifi, I don’t know why! 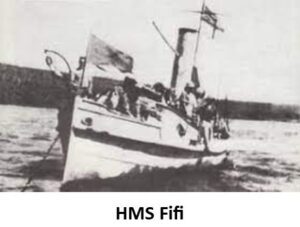 If you think this shows how unprepared they were.  They were more unprepared than that! You see the German commander, Gustav Zimmer, didn’t even investigate the Kingani’s disappearance until a month and a half later, when he sent the Hedwig to look for it!

Naturally, the British were waiting and as the Hedwig approached, they started firing, eventually her boiler blew up and she went down.   Our three ships picked up the survivors, as prisoners of war, but their greatest success was that they captured a German Naval Ensign. They became the first Royal Navy ships in WW1 to capture one. A fuller and probably better description of the Battle of Lake Tanganyika can be read at https://weaponsandwarfare.com/2015/08/08/the-naval-africa-expedition-and-the-battle-for-lake-tanganyika/

We now controlled the Lake, but as always that was not the end of the story, because the Germans wanted to take back control of the Lake and keep their army in Africa.  More importantly by continuing to harass us in Africa they felt certain that eventually the British would have to move some of their forces from Europe to Africa.  It didn’t work!

What makes our victory in this battle so incredible is how we got a mini navy through the African jungle to the Lake, because once there, victory was inevitable.  That is why logistics are so important in warfare.