Imagine a world without the printing press 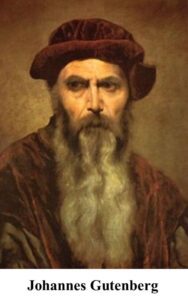 And one with no internet! How would we learn about things? An inventor was needed. That person was Johannes Gutenberg who in 1452 invented the printing press. By doing so was he the most famous inventor ever?

Who was he and how did he invent the printing press?

Well, he was a political refugee from Mainz, Germany living in Strasbourg, France in 1440 when he began trying to create a printing machine, he then moved back to Mainz.

Up to this point there was a form of basic printing. Letters and images were cut out of wood, then these blocks were dipped in ink and stamped on paper. It was a very time consuming operation, so no big books were printed!

Gutenberg realised that if he put all the blocks together in a machine, and then, printed on moving paper, everything would be faster. More importantly he could print in volume.

Therefore, he developed a movable type printing method that became known as the Gutenberg Press. It was based on a printing system developed by a Chinese inventor, Bi Sheng, in 990–1051 AD.  Sheng’s invention didn’t take off as there were so many characters in the Chinese vocabulary, and it only printed single sheets of paper. What Gutenberg did was to develop a mechanised system to transfer the ink to a moving piece of paper. 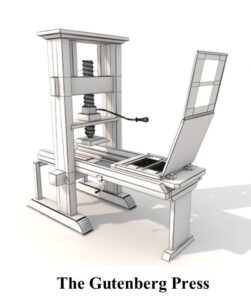 For the first time copies of books could be economically printed, which led to the broadcasting of knowledge for the first time in history.  It had the same effect on society in those days as the Internet has had today. This is why it is suggested that he is the most famous inventor ever.

The first commercial book he printed was the Bible, which later became known as the Gutenberg Bible.

But what happened to Gutenberg, did he make his fortune?

As you can imagine, he needed money to achieve his target.

He was a very talented person who had invented:

Using this money Gutenberg finished the printing press and decided that the first book to be printed would be the bible. It wasn’t because he was religious but because he thought it would make the most money. Over three years from 1452 he printed a 1,286 page bible, which is today known as “the Gutenberg Bible” 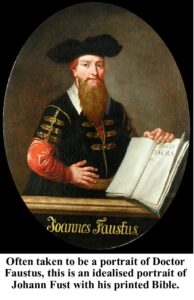 Unfortunately, he wasn’t the only person who was in it for the money, Fust was!  This meant that before any bibles were sold Fust asked for his money back. He demanded 2026 guilders, £500,000 in today’s money!  Gutenberg couldn’t pay him. The result was that Fust forced Gutenberg into bankruptcy.  The court then gave Fust the print shop and everything in it as settlement, while also ousting Gutenberg.

Of course, the first thing Fust did was put the bible on the market. However, he refused to sell it as the Gutenberg bible. It was called that several years later.

We don’t know much more about Gutenberg other than that he died a pauper in Mainz in 1468.

So, the man who invented an amazing machine that in 1460 allowed knowledge to flow around the world, at what was in those days was incredible speed, ended up broke!

Slightly different from what happened to those who invented the internet 640 years later, which, now allows knowledge to flow round the world instantly.