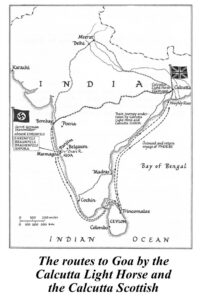 If you think that the Home Guard, we now know as Dad’s Army were only in England then you need to learn of Operation Creek by the Calcutta Light Horse in Goa in 1943.

The Calcutta Light Horse was formed in 1872 as a part of the Cavalry Reserve of the British Indian Army. By 1943 it had become a drinking club for the older officers, and they really weren’t seeing any action.

In 1943 Britain was at war, India was part of our Empire, but the small port, Goa, on the East side of India that was Portuguese.

The Port of Goa 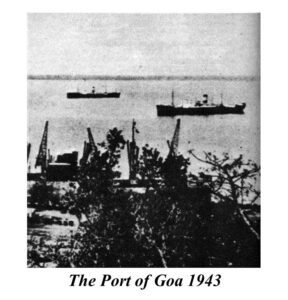 At the time there had been three German merchant ships sitting in the Port of Goa since the outbreak of the war in 1939. It was assumed that they were there as Portugal was neutral during the war while, of course, the British territory of India was not.

To start with the British weren’t concerned, it was just assumed they were taking refuge in the port for the time of the war.

Then, in around 1942, the British set up the India Mission of the Special Operations Executive (SOE) at Meerut and they started intercepting radio signals. They appeared to be coming from the harbour in Goa.  At the same time there was an increase in U-boat attacks on British merchant ships leaving Bombay harbour.  In those days it was called Bombay but after Indian independence it became Mumbai, the name we all know.

For example, in the autumn of 1943 forty-six merchant ships were attacked, it had to be stopped. The SOE then found out that a German spy, Robert Koch and his wife Grete were living Goa. SOE sent agents to in November 1942 to pick them up and question them.

The SOE now understood that The Ehrenfeld was not a merchant ship sitting out the war in Goa. It was in fact a radio station directing German U-boats to attack British ships and they were being instructed by Robert Koch.

They needed to stop it, but The Ehrenfeld was in a neutral port, and there were certain rules about that. They had to be careful.

You see the British could not infringe on Portugal’s neutrality by openly invading its territory, so they had to create a covert operation without the involvement of regular British armed forces.

This is where the Calcutta Light Horse, based 1,400 miles away in Calcutta on the other side of the Indian Continent come in, along with the Calcutta Scottish.  They were military reservists mainly middle-aged bankers, merchants, and solicitors.  The SOE then asked for 14 volunteers to go capture and sink The Ehrenfeld. 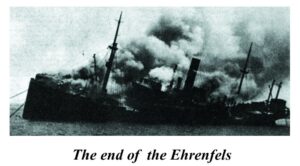 First of all, they had to be trained by the SOE, who then put some of them on a barge The Phoebe to be sailed all the way round India to Goa.  While the rest of the team took a train across the continent and joined The Phoebe.

Now it just so happened that the town where the harbour is situated Vasco da Gama was celebrating the last day of Carnival.  So, using the funds they had been given they threw a large party in the town and invited all the crews of the ships in harbour to attend, this left only a skeleton crew on The Ehrenfels.  The other thing was that surprisingly the lighthouse and luminous buoy of the harbour were not working that night.  This allowed The Phoebe to enter the harbour in complete darkness. The team then boarded The Ehrenfels, killing its captain and some of the crew, captured the ship and its transmitter. Immediate the remaining crew opened the ship’s sea valves and sank it. The Calcutta Light Horse team suffered no casualties and left on The Phoebe.

The crews of the other merchant ships in the harbour, The Drachenfels, The Braunfels and The Anfora, seeing The Ehrenfels on fire and sinking, scuttled their ships to protect them from capture by the British.

It served its purpose because after the attack, the thirteen German U-boats operating in the Indian Ocean only sank one ship in the rest of that month, only two in the next.

The crews of the scuttled ships jumped overboard and were picked up by the Portuguese authorities who put them in jail until the war ended. The local papers simply reported that they had mutinied.

Since the attack was a secret, the members of the British assault team received no official recognition of their part in the war effort.

That was until it they were the subject of a 1980 film The Sea Wolves starring Gregory Peck, Roger Moore and David Niven.