The Combat of the Thirty 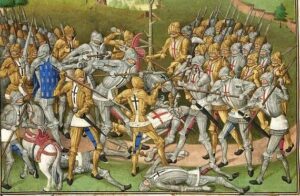 The Combat of the Thirty took place in France on 26th March 1351, during the Breton War of Succession. It even took place in front of a crowd, who were supplied refreshments and the combatants even took a half time break!

To explain, there was a struggle between the House of Montfort and House of Blois for control of the Duchy of Brittany, which was during the Hundred Years War between France and England.   The English supported the Montfort’s and France supported the Blois family, however, by March 1351 the war had reached an impasse, with each side controlling different parts of Brittany, while making raids into the other part.

This led Jean de Beaumanoir, one of the House of Blois captains, on the French side, challenging Robert Bemborough, a captain of House of Montfort, who supported the English.  The challenge was enthusiastically accepted by Bemborough, it was that each side bring 30 selected fighters, knights and squires, to a field halfway between their two castles, and to fight until one side was beaten.

That is what they did for several hours, in front of a large crowd that came along to watch and enjoy the refreshments!

Then, as they were gentleman, half way through they stopped, had a break, some refreshments, while the wounded were sorted out, then they started all over again.

Eventually, after several hours, the French side won, when, a squire, Guillaume de Montauban, rode straight into the English line, breaking it. As he killed seven of the English champions, those left surrendered. The prisoners were then taken, well treated, and, finally, released on payment of a small ransom.

The event has been celebrated by medieval chroniclers and balladeers as an example of real chivalry.

However, most say that it for the honour the two ladies who lead the two sides, being Joan, Duchess of Brittany (House of Blois) and Joanna of Flanders (House of Montfort). They were both available as Joan’s husband had been captured and Joanna’s was dead!