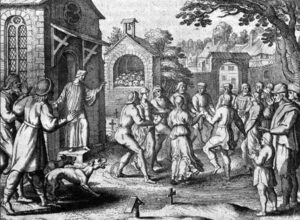 Today we dance for fun, we can dance all night, and we think nothing of it, but in the 14th century they thought it was a disease!

They called it the “Dancing Plague”.   Between the 14th and 17th centuries in European towns people would suddenly start dancing erratically, then others joined them, sometimes this grew to thousands.

Of course, the religious authorities didn’t like it, they were convinced it was a disease from the devil, you see sometimes people danced until they collapsed from exhaustion!  It became known as ‘St Vitus’s Dance’, while the sophisticated called it “choreomania” and regarded it as a mental illness or even something worse.

The first recorded big dance happened in Aachen in Germany in 1374, they then happened for several centuries as thousands of people across Europe got “Dancing Mania”.  After the Aachen dance, they were reported in Cologne, Flanders, Utrecht, and even as far away as Italy. When in Strasbourg in July 1518 Frau Troffea started dancing, within a month there were 400 dancing with her. Many it appeared suffered heart attacks and died, which doesn’t surprise me dancing for that long!

As usual the religious groups didn’t understand it, and as they could see that it was highly contagious, they got worried. With a variety of bizarre ways, they tried to stop this highly contagious disease, dancing! Their maddest idea was when they decided that musicians should accompany dancers, thinking the dancers would stop and listen to the music.

How wrong could they be!

They looked for reasons why and came up with a variety of theories. Were people dancing to forget the stress and poverty of their lives, or was this a mass psychogenic illness, whose physical symptoms were dancing in groups.  Others thought it was a curse brought about by St Vitus, a Christian saint from Sicily.  They would make pilgrimages to places dedicated to Vitus. It appeared some stopped dancing so this confirmed the link between dance and the saint. Remember, these were the days when they didn’t have autopsies, so, it was easier to put the cause of death as the “Dancing Plague”.

Amazing isn’t it, how the world has changed and how today, we love to dance.

However, remember, once it was a disease!