The Aztec Civilization was brought to an end by the Spanish.  The Aztec Empire was a confederation of three city-states established in 1427: Tenochtitlan, city-state of the Mexica or Tenochca; Texcoco; and Tlacopan. https://www.historyfiles.co.uk/KingListsAmericas/CentralAztecTlacopan.htm

It was left basically untouched until 1517 when Hernandez de Cordoba visited and reported back to the Spanish Governor, Diego Velasquez, in Cuba, what he had found. This prompted the Governor to send a larger expedition under the command of Hernán Cortés. https://www.britannica.com/biography/Hernan-Cortes

This was the start of the fall of the Aztec Empire.

In 1519 Cortés landed in Yucatán then went to Campeche, where he negotiated a peace through his interpreter, Aguilar. Unfortunately he could only translate from Spanish to Mayan, therefore the Ruler of Campeche gave Cortés a slave woman, La Malinche, who could translate from Mayan to Nahuatl.  La Malinche was a clever and quick slave who quickly learned Spanish allowing Cortés to negotiate with the other Rulers of the City States. https://daily.jstor.org/who-was-la-malinche/ 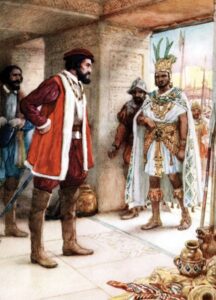 Initially, Cortes created Veracruz, as a city on the Mexican coast, from where he marched into Mexico. There, thanks to the instability of the Aztec empire, he was able to play the different native peoples off against each other.

By November that year he had reached Tenochtitlan, where the ruler Montezuma and his people greeted them as honoured guests according to Aztec custom.  Then, even though the Aztecs had superior numbers, their weapons were inferior, Cortés took control of Tenochtitlan. His men then murdered thousands of Aztec nobles including Montezuma himself. While at the same time the European diseases they bought with them, such as smallpox, mumps and measles, of which the Aztecs had no immunity, finished off even more of the population. With the result that it is said that within a year 40% of the Tenochtitlan had died.

On Montezuma’s death his young nephew, Cuauhtémoc, took over as emperor.  He took command of the army and with him in command, the Aztecs drove the Spaniards from the city. However, Cortés put together a counter-attack and re-conquered the city, this time it is said that some 240,000 people were thought to have died as a result of the conquest!   This counter-attack and subsequent occupation of Tenochtitlan, was the end of the Aztec civilization. https://www.history.com/topics/ancient-americas/aztecs 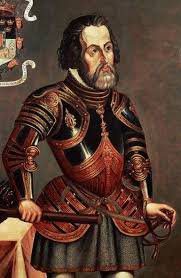 Once he occupied the city, Cortés razed it to the ground. However, he then realised how important its strategic position was, so built a new city on the site! This is the one we now know as Mexico City, which was built on an island in what was then Lake Texcoco in the Valley of Mexico.

In its peak, Mexico City became the largest city in the Americas, though it has now been overtaken by São Paulo. However, for the period of the Spanish occupation it became the chief city of the occupied territories, where both political and religious institutions were based along with the seats of both the Viceroyalty of New Spain and the Archbishopric of New Spain.

Even though the Aztec society was blotted out in 1521, even today you can still see some of the ruins of the Aztec capital, Tenochtitlan, if you visit Mexico City.

To give your students a feel of what it was like in those years of the Aztec Empire we have published a 50 minute musical The Golden City – The Lost Empire of the Aztecs, which you can download at https://www.educationalmusicals.co.uk/product/the-golden-city/