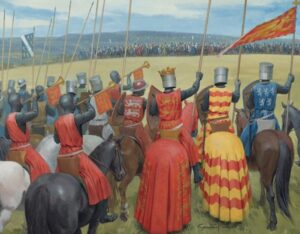 This was another time of war between the King and his Barons.

Again, it was because the King, this time Henry III, was in a power struggle with his Barons, this time led by Simon de Montford.

The Barons didn’t like the foreign influence in court, but, more importantly, the way he was attempting to tax them.  Therefore, to keep the peace in 1258 the King accepted, what at the time were called The Provisions of Oxford, which created Magnum Concilium, or Great Council, to govern the country. It didn’t work and caused even more disputes, therefore, in 1263, they agreed that French King Louis IX should arbitrate between them.   A bad idea!  You see he believed in the divine right of kings, so supported King Henry.  This led to war!

Basically, both sides chased each other across the country until 13 May 1264 Simon de Montfort cornered the King’s army at Lewis

When next day they attacked, it was a walk over for the Baron, the Royal troops had no discipline, which proved fatal. To start with the future Edward I, broke the baron’s left wing through a stirring cavalry charge.  Unfortunately, the men didn’t rally back to their positions afterwards creating confusion allowing de Montford’s men to crush the rest of the king’s army.

It was one of the most humiliating moments in Plantagenet history.

Henry and his son retreated to Lewes Priory, where they signed The Mise of Lewes.

This didn’t work either, and led to the second major battle of the Second Barons’ War.  Henry’s oldest son, Edward, later King Edward I, decided a year later to correct the defeat and led a further campaign, which ended at the Battle of Evesham in August 1265.  This time de Montfort was defeated and killed. The Barons then retreated to Kenilworth Castle, where they held out until the autumn of 1266, when they surrendered.  This led to The Dictum of Kenilworth, issued on 31 October 1266, a declaration designed to reunite the rebels of the Second Barons’ War with the royal government of England.

This time it did work.  For a short time!