It was composed of his wives, servants, female relatives and as well his concubines.

They panicked. He was the most powerful man in the Mediterranean! As soon as they could, they dropped them off at the nearest port.  That port was Candia, the capital of Crete, today we call it Heraklion.  The Nights of Malta thought they were out of trouble, but in fact what they did was kick off the longest siege in military history.

You see, unfortunately, Crete was ruled by the Venetians.  They were at that time struggling with the Ottomans for control of the Eastern Mediterranean.

The Kingdom of Candia, now called Crete, had been a Venetian possession since 1204. At the time the island was seen by both the Venetians and the Ottomans as a key island for control of the Eastern Mediterranean.

After Constantinople and Rhodes fell to the Ottomans in 1453, the Republic of Venice became the definitive protector of Christianity in the eastern Mediterranean.

However, by the 17th century, Venice was finding their power waning while that of the Ottomans was growing. This meant that the Republic of Venice were worried that the Ottomans were looking to expand their empire, Venice had to protect what they had.

As I explained earlier, in 1644, the Knights of Malta raided an Ottoman convoy on its way from Alexandria to Constantinople.   They realised that their booty would bring them problems, so they dropped it off Candia, the main port of Crete.   The big problem was, as I explained earlier, that the convoy was carrying the Sultan’s Harem and pilgrims back from the holy city of Mecca.

The inevitable response was that 60,000 Ottoman troops landed in Crete in June 1645, quickly they occupied most of Crete.  By 1648 the only town they hadn’t captured was the capital, Candia, so the siege started.

The town of Candia was now surrounded but still had access to the sea.

Naturally, the Ottomans assumed that the city would fall in a few weeks, it took 21 years!

The siege of Candia.

However, the Venetian navy was able to respond by blockading the Otterman’s access to the Mediterranean.   This had a major effect on the Ottomans supply lines, which led to several sea battles between the Ottoman and Venetian navies. 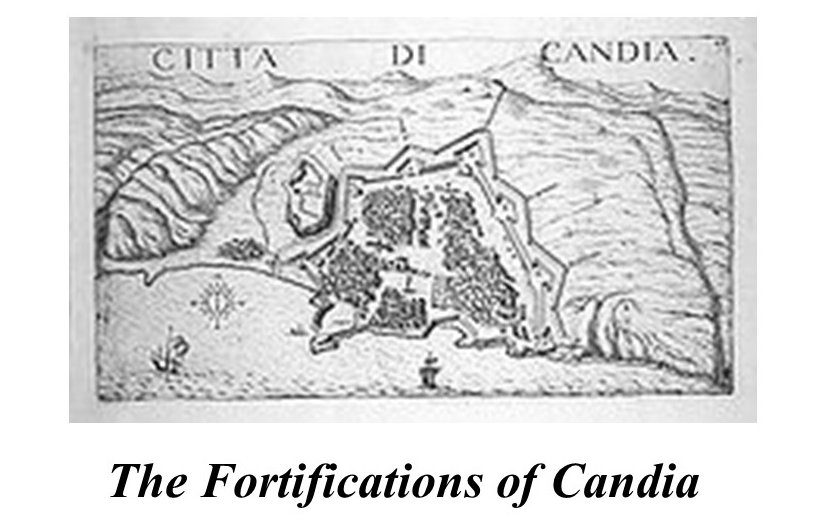 The Ottomans spent three months laying siege to the city, cutting off the water supply, and disrupting Venice’s sea lanes to the city.

For the next twenty-one years, the Ottomans continued to bombard the city without appearing to have any effect.

They were helped by history.  First of all, Venice was supported by the French who feared the power of the Ottomans in the Mediterranean. At the same time most of the rest of Europe was involved in the 30 years’ war. Therefore, even though England and Holland had strong trading links to the Ottomans, they were too busy to be involved.

Eventually, after all these years, in 1669 it all started to unravel when, finally, on 24th July, the French attempted to lift the siege. They failed!

They didn’t just lose, for the French it was worse than that. They lost one of their most important ships with the result that in August, after 21 years, they abandoned their support for Candia.

This left General Francesco in charge of Candia with just 3,600 men and scant supplies to defend the fortress.

He had no option and on 27 September that year surrendered to Ahmed Köprülü, the Grand Vizier of the Ottoman Empire. He did this as he had no option, but as he didn’t have the agreement of the Venetian Senate, who were not happy.

This guy negotiated a great deal as all Christians were allowed to leave Candia with whatever they could carry, and he held off the enemy for 21years!  But still the Senate was not happy.

Well, it is said that 30,000 Venetians died defending the city, but more than that 70,000 Ottomans lost their lives over the 21 years.

The island of Crete became part of the Ottoman Empire for the next 253 years.

All because the Knights of Malta, who independently of the Venetians, hijacked the Sultan’s Harem and when they panicked dropped them off in Crete.