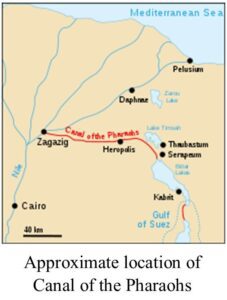 The Suez Canal blocked! What can they do?

2,000 years ago, the Egyptians had a solution, they built their own canal, called the Canal of the Pharaohs. 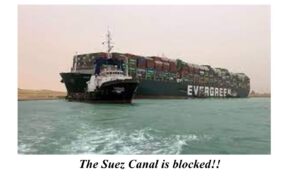 The Suez Canal became famous this year as the container ship Evergreen got stuck in the canal. The Suez Canal is today’s major route for goods coming from the Far East to Europe.  When it got blocked, the world panicked.

Today’s canal, which took ten years to build, was finished in 1869. It is 120 miles long and goes through three natural lakes.

However, the Egyptians had already built one back in ancient times, which was used, with a few interruptions until 767AD.

It followed a different route, but by linking the Red Sea to the River Nile it achieved the same aims.

It was begun by the Pharaohs, but it was not finished until the Ptolemaic period, when Egypt was ruled by the Ptolemy dynasty.

Archaeologists believe that originally it was started by Necho II in the late 6th century BC, but no one can agree when it was finally completed. They have found interesting inscriptions, comprising of five Egyptian monuments.  These commemorate the construction and completion of a canal linking the Nile River with the Red Sea by Darius I of Persia. These inscriptions were located along the Darius Canal through the Valley of Wadi Tumilat that are thought to record sections of the canal.

What we do know, is that after the death of Alexander the Great, General Ptolemy declared himself Pharaoh of Egypt and his son, Ptolemy II, took up building the canal again.  However, the different water levels blocked him, until somewhere around 274BC, his engineers came up with a brilliant idea, a lock. This lock would allow them to regulate the flow of water between the Red Sea and Nile.  A brilliant idea, which unfortunately was prone to the whims of the Nile, which frequently silted up, due to the regular flooding. It is recorded, for example, that under two Roman Emperors, Trajan and Hadrian, the canal had to actually be re-dug.

Basically, the idea of such a canal was a great one.  It was around 90 miles long, and Herodotus tells us that it took 4 days to traverse the canal.

Unfortunately, it ended up being of limited use, due to two things:

The other problem was that it only reached the Nile River delta, as you can see from the attached map.  This meant that anything going from the Red Sea to the Mediterranean Sea had a further 200 miles to travel. 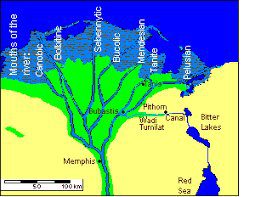 To this had to be added that sea-going craft didn’t use the Nile, and this was nothing to do with the lock.  However, it meant that cargo coming from the Red Sea to the Mediterranean Sea had to be transloaded on to riverboats at one end. Then, when they reached the other end, several days later, had to be loaded onto another sea-going ship.  This added even more time onto the movement of cargo, as at each end it took a further two days just to load or unload.

Even so it worked until the early seventh century when, it silted up, then was reopened around 641 AD by Amr, the Muslim conqueror of Egypt. Unfortunately, it was finally closed in 767AD, as they had to stop supplies reaching rebellions in both Mecca and Medina.

2,000 years ago, there was a route from Europe to the Orient, but then world trade didn’t need it, only local trade, so it died and silted up.

It wasn’t that important then, it is now.