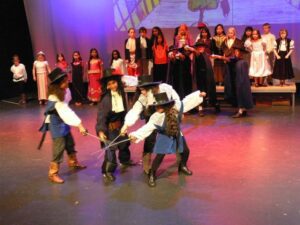 They were, but Alexandra Dumas’s story The Three Musketeers isn’t a true story but a fictional story woven around the lives of real people who actually lived at different times.

We love the story, so have made Alexandre Dumas’s famous tale, The Three Musketeers, into a rollicking foot tapping 50-minute musical for your children to enjoy performing as a year-end show. 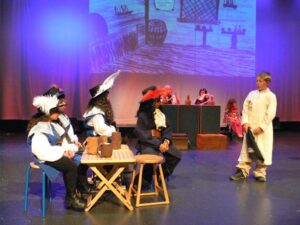 This swashbuckling musical, that is set in France during the 1620s, is about chivalry, honour, and most of all, adventure.

What very few people know is that it is based on real live people, all Alexandre Dumas did was weave them into a great story.

The musical takes those rich characters and Dumas makes them into romantic heroes, kings, queens, cavaliers, and criminals.  He then created an adventure story that includes conspiracy, murder, vengeance, love, scandal, and most of all, suspense.

Which great characters of the age did he use?

The true characters were Cardinal Richelieu, who constantly fought with the Queen, the Duke of Buckingham (King Charles 1st of England’s first minister) and, of course, King Louis XIII himself.

Yes, there was a real d’Artagnan, albeit 20 years later, in fact, there were two!  One became the Captain of the Musketeers and the other, his cousin, a Marshal of France!

He was known as d’Artagnan and later Count d’Artagnan.  He was also a Musketeer who served Louis XIV as captain of the Musketeers, who died at the siege of Maastricht in the Franco-Dutch War.

He was the cousin of Charles de Batz de Castelmore, to whom he lent one of his titles, comte d’Artagnan.  Montesquiou was a musketeer for 23 years and became a brigadier in 1688.  He was involved in many battles and eventually made a Marshall of France on 15 September 1709.  This was due to his actions at the Battle of Malplaquet, when he was wounded after having had three horses shot under him.

It is understood that Dumas used both of them to create his fictional d’Artagnan.

Dumas went further as the musketeers were also based on real people. You see Charles de Batz de Castelmore wrote a diary where he explains his first visit to M. de Treville, the Captain of the Musketeers.  He tells us that while waiting to be interviewed, he met three young musketeers called Athos, Porthos and Aramis.

Yes, their full name was The Musketeers of the military household of the King of France.  They were an elite military branch of the Royal Household who acted as the king’s guard while he was outside of the royal residences.  The Musketeers also fought in battles on both foot and horseback.

However, not long after they were formed, another company of soldiers was created, and they reported to Cardinal Richelieu.  This gave an author like Dumas a perfect reason for the two to dislike one another.

Just a bit more fun for him to put into his book!

The Three Musketeers – The Queens Diamonds – the musical

With all this trickery and scheming, that includes stolen diamonds, masked balls, and, of course, swordplay, made The Three Musketeers – The Queen’s Diamonds an ideal end of term show.  It is a musical that brings to life the intriguing and romantic court of Louis XIII. The big difference this time as the baddie is female, the sinister Lady de Winter, who it appears is a figure of Dumas’s imagination.

To read two pages of script and listen to three of the songs please go to https://www.educationalmusicals.co.uk/product/the-three-musketeers/