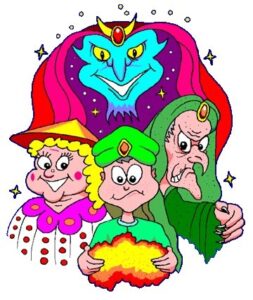 The first modern day Aladdin Pantomime was created by Henry J.Byron.  It didn’t, as claimed, come from The Book of One Thousand and One Nights nor was Aladdin from The Arabian Nights, actually they are both the same book!

As an aside The Arabian Nights or the One Thousand and One Nights is about a king who learns that his wife has been unfaithful. Not happy, he has her killed. He then decides that all women are the same, so he begins to marry a succession of virgins.  Then the morning after the marriage, before they have a chance to dishonour him, he executes them.

This creates a conundrum for his Vizier, whose job it is to find the girls willing to be a wife and then die.  It becomes very difficult.  Then to his horror his own daughter puts herself forward to be the next bride. The result, one terrified vizier!

However, on the night of their marriage, she starts telling the king a tale but doesn’t end it. The king wants to hear the end so doesn’t execute her. The next night once she ends that story, she starts another but doesn’t finish it, again the king halts her execution.  This goes on for 1000 and one nights when the King finally reprieves her, her life is spared.  The book is meant to be those 1001 stories, which of course it isn’t.

A Frenchman, Antoine Galland, decided to translate the book from Arabic to French, but he decided

the book was too short.  So, he added a few extra stories!  Aladdin was one of them, which he had heard from a Syrian storyteller, Hanna Diyab.

This has created a puzzle. You see Diyab was a Syrian and the Aladdin story is set in China. Nobody knows who moved it to China, or whether Antoine changed it, so it didn’t look as if he had stolen Hanna’s story.

We do know that as a result it became the most famous story not in the originalbook!

Aladdin wasn’t the only story that Galland added. There was also ‘Ali Baba and the Forty Thieves’, and ‘The Seven Voyages of Sinbad the Sailor‘.  They were all stories told to him by Hanna Divab.   https://www.aramcoworld.com/Articles/July-2021/The-1001-Tales-of-Hanna-Diyab

The Aladdin Pantomime we have now was created by a great pantomime author Henry J.Byron. He was a distant cousin of that famous romantic poet, Lord Byron. Evan though the first performance of a show called Aladdin was in 1788, at the Theatre Royal, Covent Garden.  Byron’s adaptation was first staged at the Strand Theatre during April 1861 and is the basis from which all the modern “Aladdin’s” have come

It had all the famous pantomime characters, such as: 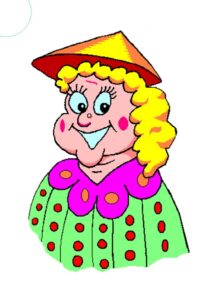 It is claimed that she was created by H. J. Byron.  When in 1861 he became involved and rewrote Aladdin, it was a burlesque version of the story we have today. By ‘burlesque’ I mean it was parody in an absurd and comically exaggerated way.

Byron decided Aladdin’s mother should be running a Chinese laundry, as at the time there were several Chinese laundries in London’s East End of London.

His other reason was that it allowed there to be a slap-stick comedy scene in the laundry.  This has now become an essential scene in every pantomime. The first slap-stick scene was in this version of Aladdin.

Then to increase the comedy he decided that Widow Twanky should be played by a man! The age of the pantomime dame was started.

This is interesting, why was she called “Widow Twanky”?  Well, it appears that at the time there was a brand of cheap China tea called Twankey.  He used the name to imply that she is ‘past her best’ much like the ragged Twankey tea.

At the first recorded performance of ‘Aladdin’ in 1788, there was a villain, but he didn’t have a name.

It was not until the 1813 production that he got the name ‘Abanazar’.  The name stuck.

However, it was in the Henry Byron version that the real character of Abanazar appeared.  He wrote him as an evil character that he wanted to be played for laughs.

You can see why the April 1861 version has become the script from which all modern “Aladdin’s” have been based.

All that was missing was that bit of magic that every pantomime needs. To do that he stole the story Genie of the Lamp. Unfortunately, in that story the wishes just three, this didn’t work for Aladdin, so it was changed to as many as he needed, provided his hand was on the lamp.

That’s how the Aladdin story grew into what we have today. 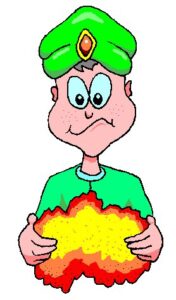 We wanted a different pantomime, one that was a bit potty, while keeping to the basic story, we have published Aladdin’s Lump, our Potty Panto. This time Aladdin can’t find the lamp, so Abanazar locks him in the cave!  Of course, now he needs the genie to get him out. How does he call up the genie? Guess what, he strokes a lump of stone!

That’s what’s behind our Potty Panto “Aladdin’s Lump”, which we wrote for your children to enjoy not only to watch but more importantly to perform. You can simply download by clicking  https://www.educationalmusicals.co.uk/product/aladdins-lump/