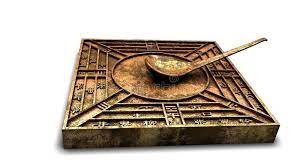 Well, we do know that the Chinese were known to use a magnetic compass during the Han Dynasty between the 2nd century BC and 1st century AD, like the one on the left.  It wasn’t for navigation, no, they used them for fortune-telling! Then for divination, a way of finding the unknown by supernatural means.

This first compass was used as a form of feng shui to point people in the right direction. This was very important for the Chinese as it helped people to order and harmonize their environments and lives.

It used lodestone, a natural permanent magnet, formed in the shape of a spoon put on a flat, square-shaped plate made of bronze, meant to represent the Earth. Due to its magnetism the handle of the spoon always pointed south. Learn more here …..

When was it first used on ships?

Around 1040 the Chinese twigged that the magnetic compass could be used by the military for navigation.  Somewhere between 1111 and 1117 they started using it for maritime navigation. Unfortunately, until 1125 the records are unclear, but from that date we have evidence of the Chinese using it as a navigational tool.

In those days a compass was simply a magnetic needle floating in a bowl of water.

Now it gets interesting, as it appears that the Chinese weren’t the only ones floating a needle on water.  A needle floating in water was being used by European sailors and Arabs on their dhows in the Persian Gulf. I am sure if you investigated sailors on the other continents, they were all using something similar. Click here for more …..

So, who invented the compass?

I don’t think a single person did. I believe that the compass evolved at the same time all round the world once they understood magnetics, for example

This became obvious as European sailors started exploring the rest of the world in the 15th century.  As they came across a problem.  They found that the “north” on their compass was not pointing to the north as they understood it, which they then called the true north. They called this difference “the variation” or the clever ones “the magnetic declination”.

As well as showing North in a different place, it kept changing depending on where they were. 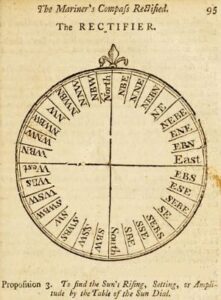 For example, it wasn’t a problem when you were near the equator but the further north you went, the bigger the difference became.  This meant that when travelling north you had to keep adjusting your compass readings to take this difference into account. They used “The Rectifier” in conjunction with their charts and the position of the sun.

Things changed again when we started making steel ships, as the magnetism in the steel changed the readings!  They called this a deviation. They came up with mad ideas to increase the accuracy of their readings, such as putting soft iron balls or bar magnets near the compass. None of them worked, so in the end they produced endless tables to help navigators compensate for the difference.

Naturally, when the airplane came along, they had to create a different deviation, especially once planes were made of metal.

Therefore, the answer to the question is that no single individual invented the compass, it evolved across the world around the 12th century.

Now, of course, we have Satnav and global positioning satellites, which after thousands of years will eventually make the compass redundant?