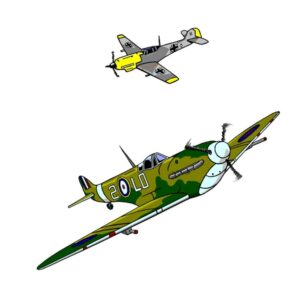 Of course, the fighter pilots.  But they couldn’t have won without an awful lot of support.

For example, at the beginning of the Battle of Britain the RAF had around 1,960 aircraft at its disposal in July 1940, of this only 900 were fighter aircraft.  They did have 560 bombers and 500 coastal aeroplanes, all of which they had to throw in at some point in the battle.  We talk about the Spitfire as the iconic plane of the war, however, it was the Hawker Hurricane that actually took down more German aircraft.

Across the channel the Luftwaffe had 1,029 fighter aircraft, 998 bombers, 261 dive-bombers, 151 reconnaissance planes and 80 coastal planes.  We were horribly out numbered.

With the odds staked against us how did we do it?

It was a whole country effort, the pilots who were young, arrogant, and fearless soldiers at the front would have achieved nothing without: 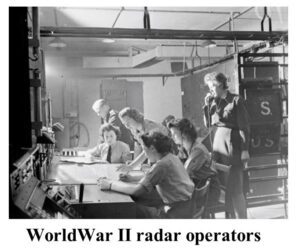 It gave us a crucial advantage.  We had in place a special network of Radar stations along the coast.  They allowed us to know when enemy aircraft were approaching allowing us to direct our fighter pilots to these incoming aircraft.  This meant that we got our planes in the sky immediately an incoming threat was identified.  But, much more importantly, once in the sky we were able direct them exactly to where the enemy were.

It was a simple but sophisticated system, which started with a spotter on the coast, a member of the Royal Observer Corps.  His job was to scan the sky for incoming planes, once they were seen he would immediately pass this up the line.  His information was then linked to what the Radar allowing the centre to process huge amounts of information in a very short space of time.  This made it possible for Fighter Command to manage incredibly effectively their relatively limited resources. 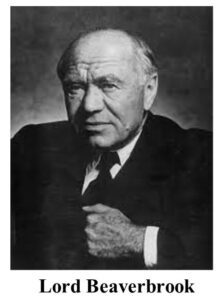 A Ministry of Aircraft Production was set up in May 1940 and Lord Beaverbrook a successful businessman was put in charge. Initially he ran the ministry from his private home, Stornoway House.

As time was of the essence in the summer and autumn of 1940, rules had to be broken, or as they said, changed!  For example, it was found that over 1,000 aircraft had been received from the manufacturers but only 650 delivered to pilots. The red tape was changed almost instantly.  Fighter production grew from 638 in the first 4 month of 1940 to 1,875 between May and August that same year! We were now producing aircraft two and a half times faster than Germany.  There is even more, as during the same period we improved our aircraft repair and return to service, sending back nearly 1,900!

This meant that while the German fighters force fell from 725 to 275, ours increased from 644 to 732 by October 1940. https://en.wikipedia.org/wiki/Minister_of_Aircraft_Production 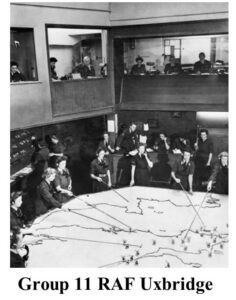 They were our secret weapon, in June 1939 the Women’s Auxiliary Air Force was formed originally to do simple clerical, kitchen and driving jobs.  Then the war arrived, and with the men off at war suddenly the talents of women were recognised, and they were moved from the kitchens to much more important jobs.  They became essential in telegraphy, became mechanics, engineers, airplane fitters and in radar control rooms as plotters and reporters.

For example, at Group 11 RAF Uxbridge, which commanded all of aircraft in South East of England 85% those working in the bunker were women. https://www.rafbf.org/news-and-blogs/vital-role-women-played-battle-britain

All these factors led to our victory, but they would all have failed without those brave pilots.

We have written Battle of Britain – A Story of the Few, telling the story of four young people who joined the RAF.  Go to https://educationalmusicals.co.uk/product/battle-of-britain-super-performance-pack/ where you can hear two songs and read two pages of script.