Who was Paul Pry? 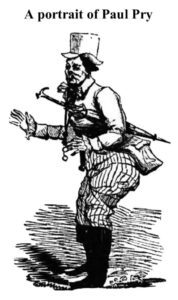 Well, the noun Paul Pry denotes an inquisitive person; one of its synonyms is nosey parker.  It was also a play written by the English playwright, John Poole, the name of Anne Newport Royall’s newspaper, Paul Pry, so who was Paul Pry?

The point is that he wasn’t a person! He was the character in a farce of three acts that premiered at the Haymarket Theatre in London on 13th September 1825 and ran for 114 performances, it then continued to be popular all the way through to the 1870s. The interesting point about it is that it achieved many more things than just being a great farce, it even became a dictionary phrase.

It became a phrase regularly used in conversation, so much so that in 1870 an English clergyman and schoolmaster Ebenezer Cobham Brewer defined Paul Pry in the Dictionary of Phrase and Fable (1st edition – London, 1870). For more about this fascinating story and examples of its use you should go to https://wordhistories.net/2017/10/26/paul-pry-origin/.

Paul Pry was a play that was a farce, it was about a comical, idle, and mischievous character who was unable to mind his own business and who kept interfering in other’s lives by leaving his umbrella behind wherever he went. Of course, it was a play and as happens in many plays, at the end he came up roses as due to his interfering, he eventually found some incriminating papers.

It was such a successful play that it and the story of Paul Pry’s curiosity spread across the Atlantic Ocean to the United States.  So much so that in 1831 Anne Newport Royall opened a newspaper in Washington with the name Paul Pry.  She then used it as a crusading paper for campaigns against government corruption and incompetence, as well as promoting states’ rights, a Sunday mail service, and even for tolerance of Roman Catholics and Masons. You can learn more about her, the newspaper and what happened to it at https://www.britannica.com/topic/Paul-Pry .

The play itself was by the English playwright, John Poole.  He was famous for his plays, which were all in the genre of farce, in fact in the 19th Century he was one of the earliest and best known playwrights specialising in farce.  However, his play Paul Pry has always been judged as his most notable work, even though he had previously achieved fame by writing burlesque caricatures of two of Shakespeare’s plays:

In London Paul Pry became so popular that it naturally led to rumours as to who was the person on whom it was based.  The main candidate was Tommy Hill, who was at the time the eccentric editor of the Dramatic Mirror. This was mainly because everyone knew that he and John could regularly be seen walking together in Kensington Gardens. However, Poole claimed Pry was not drawn from any one person, but from a class and went on to explain that he could mention five or six people whose personality contributed to the play.

The next interesting thing about this play is that it led to development and growth of a small industry to a major one, merchandising.

John Liston was the first actor to play the title role, he had a costume of striped pants, hessian boots, top hat, and tailcoat. 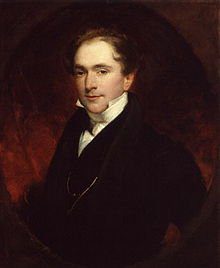 As the show’s popularity grew, so John, became Paul Pry in the public’s eyes and his picture, (the one shown above), appeared on signs, shops, warehouses, handkerchiefs, and snuff boxes. This led to what in 1825 was a fledgling merchandising industry, basically, small factories across middle England were producing porcelain figures of Paul Pry, they even went as far as to produce, and actually sell, a butter stamp, his image could be on your breakfast table!

So, this simple play led to a new phrase, a new newspaper in America and the growth of the merchandising industry, all from a short 28-page play. Who would have thought it would have this far-reaching effect.

To read other fascinating history blogs go to : Read more