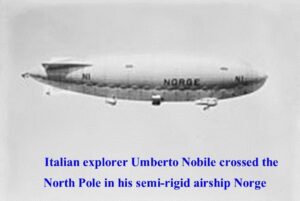 You would have thought that there wouldn’t have been any dispute over who the first man was to fly over the North Pole, but there was!

In 1908 Frederick Cook, Robert Peary in 1909, and Richard E. Byrd in 1926 all claimed to have done it, and are all disputed as being either of dubious accuracy or outright fraudulent.

Why was there a problem? Well, they set off from Spitsbergen, an island on the Svalbard archipelago, around 650 miles from the North Pole, and over 1,200 miles from mainland Norway.  16 hours later they returned to Spitsbergen telling everyone they had flown over the North Pole.

The problem was that they returned 15 hours 44minutes after they left. However, if you calculate the speed of the aircraft along with the distance to the North Pole, the trip should have taken 19 hours. They explained the time difference away by saying they had a strong following wind that bought them back so quickly, conversely, that wind should also have slowed them going out!

Then, two days later a semi-rigid airship designed by Umberto Nobile also left Spitsbergen. It was led by Roald Amundsen, the man who beat Scott to the South Pole and took a ship through the Northwest Passage, he now wanted to cross the Arctic by air. He left with Umberto Nobile as the pilot, the expedition’s sponsor, Lincoln Ellsworth, and 13 others.

They reached the North Pole. This time they dropped Norwegian, American and Italian flags onto the ice so there would be no argument. Unfortunately, there was a problem when Amundsen realised that the Italian flag dropped was much larger than the other two. Anyway, as they continued,  pieces of ice started growing on the airship’s propellers, then flying off and hitting the outer cover, ripping and tearing the fabric. Due to this and the worsening weather, they landed in Alaska at the village of Teller.

We know they did cross the North Pole, from the flags, but did the others?  We will never know!