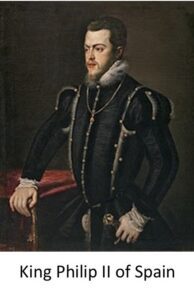 The Spanish Armada failed because the Duke of Parma late on his meeting with the Spanish Fleet?

The Spanish King had a clever plan,.  He built an armada of ships that were enough to bring 30,000 soldiers across the channel. His plan was the fleet to up the English Channel to Calais, there they would pick up the 30,000 soldiers.  They would then be transport across the Channel at its shortest point and deposited in England. As it was a relatively short journey they wouldn’t be too exhausted and would be ready to march on London.

It was a simple plan that we all know failed. Our musical The Spanish Armada – The Invasion of England tells the story click here … https://www.educationalmusicals.co.uk/product/the-spanish-armada/

I was curious to find out why on earth there were 30,000 Spanish soldiers and the Duke of Parma in Belgium anyway?  What were they doing there? 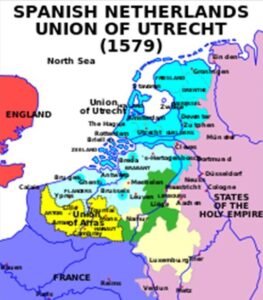 This was the result of the power of the Habsburg family had across Europe at that time. Along with the relationship between the Austrian and Spanish Habsburg families, who interbred therefore were closely related.

The Austrian Habsburgs were the Kings of the Holy Roman Empire and ruled from Vienna in Austria. The Spanish Habsburg was the King of Spain, and the two Kings shares their territories, in a way. They tended to support each other, because, it was “The Family”.

Now, because it was the Holy Roman Empire, they were Catholic and they owed their allegiance to the Pope in Rome.  However, this time when Europe was going through a religious transformation.  This was very true in the Dutch areas of the Spanish Netherlands, as they were becoming protestant.   To make things worse some years before England had reject Catholicism and started the Church of England. As shown in our musical Henry – The Break with Rome to hear two songs from the show click here. https://www.educationalmusicals.co.uk/product/henry-viii/ 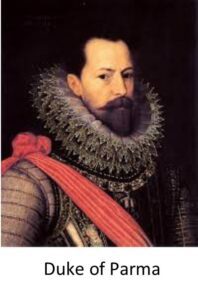 The result was there was discontent, and several of the Provinces started to rebel against Spanish rule. This explains why the duke  had such a large army at his command. Especially as On 23 January 1579 the Provinces signed the Union of Utrecht, in effect, they declared independence. Then in 1581 they went further and formed the independent Dutch Republic.  The southern provinces didn’t join the others and stayed loyal to Spanish rule.

In a way he failed, but these 30,000 Spanish soldiers were here to make certain that he didn’t lose any more of the Spanish Netherlands.  While from the British point of view 30,000 soldiers just across the English Channel, was rather too close for comfort.

So, it makes sense that the King of Spain wanted to use them, even though in the end he didn’t as when the ships got the Calais, they weren’t there!