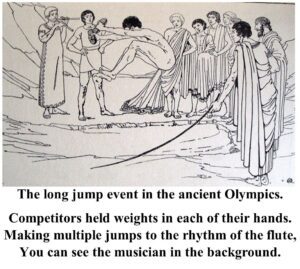 Did you watch the Naked Games? If you had watched the Olympics 2,500 years ago you would have.

This is because at the Ancient Olympics the competitors took part naked!

Even more, in the long jump, they were not only naked, but they also had to hold weights in both hands and jump to the rhythm of the music!

The BBC would never have been able to show the naked games!

There is even more. Married women were not even allowed in to watch but unmarried girls could.  I wonder why?

So, why couldn’t adult women watch?

This is true, men, boys and unmarried girls were allowed to attend, while the male athletes competed nude but married women were not allowed to attend.  They faced severe punishment if they were caught. They said, the gods had decreed it.  A likely story, I believe it was to improve the stock!

One married lady, called Callipateira, was caught at the men’s Olympics. She had disguised herself as a gymnastic trainer. In the end, she was allowed to go unpunished because her father, her brothers and her son had all been victorious at Olympia. However, a law was then passed that compelled all trainers to strip before entering the arena!

We tell the story in our musical The Ancient Olympics – The Story of Callipateira which you can download at https://www.educationalmusicals.co.uk/product/the-ancient-olympics/

The reason why adult women not allowed to attend was because Olympia was a sacred area dedicated to Zeus and was therefore sacred for men.  However, some events, like the chariot races were in later Olympics held outside of the sacred area so women could watch them.

Women did have their own festival, which was also held once every four years. It was called the Heraia in honour of Zeus’ wife, Hera.  The Heraean Games were held in the Olympic stadium, as the first athletic competition for women.

The Heraean Games, dedicated to goddess Hera, the queen of the Olympian gods and Zeus’ wife, was the first official women’s athletic competition to be held in the Olympic stadium at Elis. The games, which occurred in the 6th century BC, were probably held in the Olympic year itself, prior to the men’s games.

Initially, the Heraean Games only consisted of foot races. The champions of the events were rewarded with:

The only recorded victor of the foot races is the mythical Chloris, Pelops’ niece who was also said to be Zeus’ granddaughter.

Participation in the Heraean Games was restricted to young, unmarried women. As explained, men competed nude in the Olympics but the Heraean Games were not the Naked Games, women wore a chiton, usually worn by men for heavy physical work. Pausanias described it as “their hair hangs down, a tunic reaches to a little above the knee, and they bare the right shoulder as far as the breast.”

The Origin of the Heraean Games

Nobody really knows. Pausanias, a Greek traveller and geographer of the second century AD, provides us with two separate theories. The first he suggests that Queen Hippodamia was grateful to Hera for her marriage to Pelops and selected 16 women to compete in footraces in Hera’s honour. He also suggests it was the result of diplomatic efforts to resolve tensions between the cities of Elis and Pisa in western Greece.

It appears that the sixteen wise, elderly women were chosen from each of the 16 Peloponnese city-states.  Their job was to weave a robe for Hera every four years and to organise the games as symbols of peace. Pausanias wrote “Every fourth year there is woven……. for Hera, a robe by the Sixteen Women, and the same also hold games called Heraea.”

Nobody knows why the Greeks set up a separate games for women or whether they were only a temporary easing of restrictions on women. However, in Rome the daughters of wealthy families freely participated in men’s festivals and athletic competitions. As the Roman Empire was slowly growing and influencing the whole of the modern word, the Greeks may have wanted to show they could change.  That maybe me thinking it through too deeply.

However, it does lead to the question, was it a legacy of the Roman times, women Olympians?