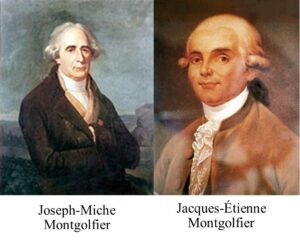 Well, that is exactly what Joseph Montgolfier did, and it led to him, with his brother, Étienne Montgolfier, coming up with the first air balloon, which in turn led to the first untethered manned hot-air balloon flight by Jean-François Pilâtre de Rozier and François Laurent d’Arlandes on November 21, 1783, in Paris, France, in a balloon created by the Montgolfier brothers.

The whole history of flight started one evening in 1782.  Joseph Montgolfier was sitting in front of his fire speculating as to what caused the embers to rise from the fire. He couldn’t decide if the smoke itself made them rise. So, he decided to do what seemed to him obvious, he filled a small box with some crumpled paper and lit it! He got his answer, because, when lit, the box rose all the way to the ceiling.

This led him to work with his brother, Jacques–Étienne Montgolfier, whom everyone called Étienne, to experiment with a box three times bigger, this time they filled this box with wool and hay.  They then, fortunately, set it alite outside, which turned out to be very sensible. You see, as soon as they set fire to it, it took off so fast that they lost control of it, they eventually found it a mile away!

At least they knew their theory worked.

Therefore, they decided to put together a globe shaped balloon, as they now needed supporters to help them. On 4 June 1783 they flew their balloon in front of a group of dignitaries. This balloon flew 1.2 miles, lasted 10 minutes, and was estimated to have reached an altitude of 1,600-2,000 meters. I have no idea how they measured the altitude! https://www.britannica.com/biography/Montgolfier-brothers

His brother, Étienne then took it to Paris where he gave further demonstrations. As a result, he met a wallpaper manufacturer, Jean-Baptiste Réveillon, and together they made the first hot air balloon, which they called, the Aérostat Réveillon and for which Réveillon even produced special and colourful wallpaper simply to cover the balloon. 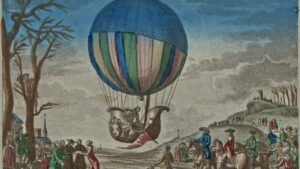 On 15 October 1783 Jacques-Étienne Montgolfier became the first human to lift off from the Earth, making a tethered flight from the yard of the Réveillon workshop. Later that same day, a physicist, Pilâtre de Rozier, became the second man to leave this earth, still tethered to an 80-foot length of the rope. https://en.wikipedia.org/wiki/Hot-air_balloon

Finally, on 21 November 1783, in front of the Dauphin, the King’s heir, at Château de La Muette, the first free flight was made by Pilâtre de Rozier and the Marquis d’Arlandes who became the first men ever to be borne aloft in free flight.  They flew the balloon from the Bois de Boulogne in Paris to the suburbs, about 5.5 miles, in 25 minutes. Unfortunately, they had to stop when the burning ash from the fire started to burn the balloon’s fabric!

They wrote a new page on the history of mankind. 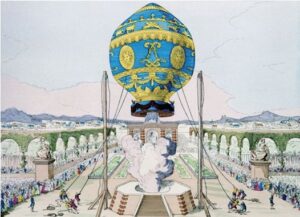 Benjamin Franklin, who witnessed the ascent, wrote in his journal:

“We observed it lift off in the most majestic manner. When it reached around 250 feet [76 m] in altitude, the intrepid voyagers lowered their hats to salute the spectators. We could not help feeling a certain mixture of awe and admiration.”

It nearly didn’t happen, all because in those days people believed that the upper atmosphere would damage living creatures.

Therefore, the King banned it!

Well until it could be proved that it didn’t.

However, he had his own way of finding out. He proposed they send two convicted criminals up to find out!  He had to be talked out of it, in the end he agreed that a sheep, a duck, and a rooster could go instead.  So, they put the animals in a basket attached under the balloon, and launched it from the royal palace in Versailles, in the presence of the Dauphin. It worked; the animals survived an eight-minute flight. At last, the King agreed to allow human flight.

There is an additional unfortunate fact, as two years later Pilâtre de Rozier, one of those first two human passengers, became the first victim of air travel when on June 15, 1785 his balloon exploded as he was attempting to fly across the English Channel.

This is how human flight stared, these events started air travel that led to the bonanza of airplanes that we now live with.

Therefore, next time you go on an aeroplane just remember, flight came about because a man filled a wooden box with paper and lit it!

Does it make you feel safer?