Meet Goldilocks in our Potty Panto Goldilocks & The 3 Scares, you will learn that she always knows best.

Well, at least she thinks she does!

For example, she went to Mr Crumbs, the baker, to fetch some bread. Unfortunately, she decided that the oven wasn’t hot enough.  We are not certain about the details, but the fire brigade was seen putting out a fire!

But she only wanted to help, the trouble is she caused more trouble and problems by just trying to help.

She thought she was helping people, the villagers weren’t so sure, and there is a song in the Potty Panto Goldilocks & The 3 Scares, https://www.educationalmusicals.co.uk/product/goldilocks-the-3-scares/which tells you what the villagers thought of her:

Oh no Goldilocks, here she comes.
She’s a menace, compared to none.
Causing chaos wherever she goes.
Goldi, Goldilocks!

A know-all with prizes in being unkind.
Who interferes with all she finds.
A tongue that’s so sharp that she could cut herself.
No boys will go near her. She’ll end up on the shelf.

The villagers told her about the terrors of the Spooky Forest, and that it is full of all sorts of monsters and ghosties. Of course, she knew better and told them she would go off to the Spooky Wood and show them there weren’t monsters in the forest.  She knew best!

Off to the Spooky Wood she went.

She finds a house and being very hungry tries some food. The food is horrible and the house a mess, so she decides to “tidy it up”.

Wow, this does cause trouble and fun, as she decides to tidy it up.

She feels tired and finds a bed and falls asleep. 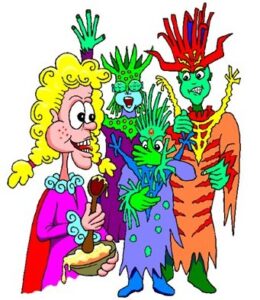 They are monsters! Called Dad Splodge, Mum Splurge and little Splat. They are not happy their house has been tidied up.  They then find her in a bed and wake her.  You see monsters like living in a mess. They make certain she knows this.  This is a light bulb moment for Goldilocks.

She realises that she has to think of others, which is the moral of this story. As there has to be a moral with every Panto.

But where did it come from?

It was a story written by Robert Southey, a writer and poet.  Would you believe that originally, he published it in 1837, well it was included in an anonymous book of his writings.   He called it “The Story of the Three Bears”

However, it didn’t stay ominous for long. George Nicol, his editor, leaked who the anonymous author was.  He thought that Southey should be recognised as the great and original writer of “The Story of the Three Bears”. Southey was delighted with Nicol’s effort to bring more exposure to the tale, as he was concerned that children might overlook it in his book. The result was that the book was reissued in 1848 with Robert Southey this time shown as author.

Actually, the story of the three bears had been around for years. It is known that as early as 1813 Southey was telling this story to friends.    Then, in 1831 an Eleanor Mure produced a special handmade booklet about The Three Bears and the Old Woman, specially, to give her nephew, Horace Broke, for his birthday.

You can see why Southey’s story grew into the panto we have today.